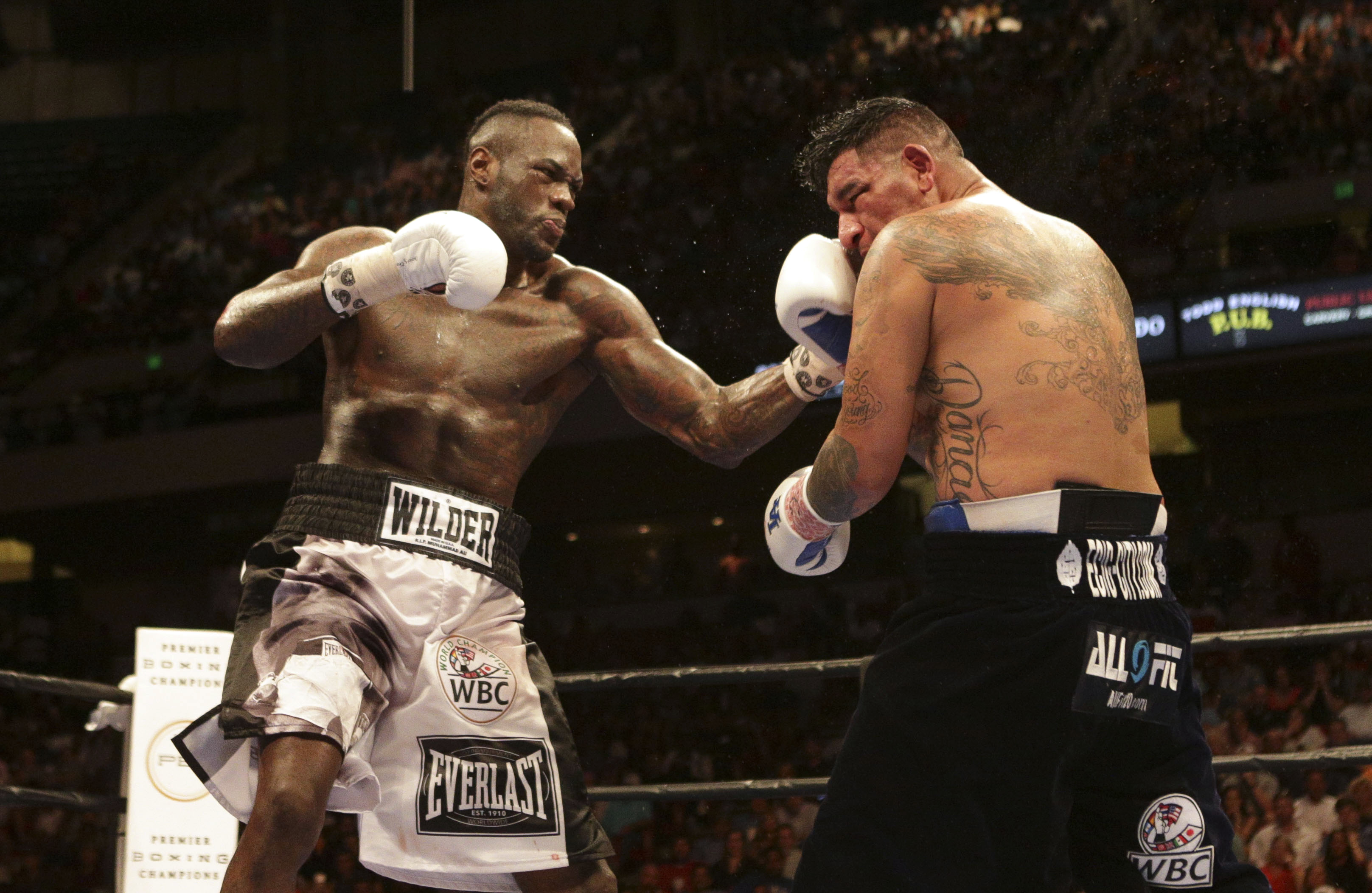 BIRMINGHAM, Ala. -- Despite fighting mostly one-armed for half the fight, Deontay Wilder remained in control in the ring before quickly heading to the hospital.

Wilder retained his WBC heavyweight title with a technical knockout when Chris Arreola's corner stopped the fight after the eighth round Saturday night at Legacy Arena.

Arreola's left eye appeared swollen shut. An injured Wilder (37-0, 36 knockouts) knocked down Arreola in the fourth and peppered him with left jabs and hooks after landing hard rights early.

Promoter Lou DiBella said Wilder was taken to nearby UAB Hospital after a doctor confirmed he had a broken right hand and a probable distal tear in that elbow. Both injuries happened in the fight.

Wilder showed reporters his injured bicep as he headed to the locker room and said he was already certain the hand was broken. He threw the right, his biggest weapon, sparingly after the fourth round.

It was Wilder's fourth title defense and third in Birmingham, about an hour from his hometown of Tuscaloosa

Arreola (36-5-1) took the fight on short notice after Wilder's mandatory defense against Russian Alexander Povetkin was called off in May. Povetkin failed a drug test.

Wilder wobbled Arreola with a right hand then knocked him down with a barrage late in the fourth. He had Arreola off-balance on the ropes when the round ended.

With his right hand mostly out of commission, Wilder appeared to hurt Arreola again with a left in the final seconds of the seventh. Wilder also broke his right hand in winning the title against Bermane Stiverne in January 2015 and had surgery.

He had a wound on his right elbow going into the fight, and it was bleeding by the end in addition to his more serious injuries.

Wilder had to go looking for another opponent after his May fight with the WBC mandatory challenger Povetkin in Russia fell through. Povetkin tested positive for the banned substance meldonium.

CBSSports.com reports that Wilder still would like to challenge Povetkin and is suing him for the purse he lost for missing the fight.

He settled for some $3 million less ($1.4 million) for the fight with Arreola, calling him the perfect opponent because of his heart and toughness.

Arreola indeed withstood a barrage and landed some body shots at times after getting Wilder against the ropes. At least twice, Wilder made a gesture with his hips while absorbing those punches.

Arreola, who made $150,000 for the fight, had previously lost title shots to Vitali Klitschko and Stiverne. Wilder claimed Stiverne's title with a unanimous decision in January 2015, which remains his only professional fight to go the distance.

Arreola's majority decision over Travis Kauffman in December was ruled a no contest when he tested positive for marijuana.