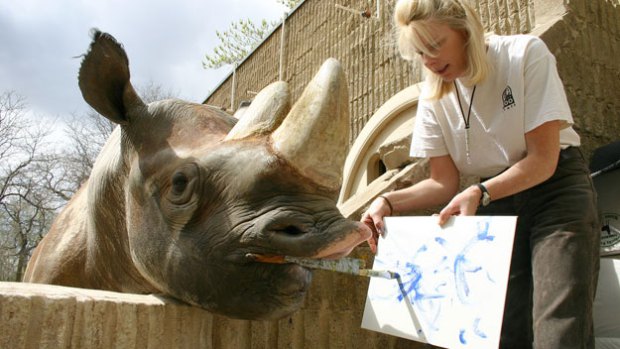 Mshindi had chronic foot problems that got progressively worse over the last few years, zoo officials say. The rhino was humanely euthanized on Wednesday.

"The median life expectancy for black rhinoceroses living in North American zoos is 17.8 years," the zoo said in a statement.

The rhino was best known for his painting where he would hold a brush in his mouth and run it along a canvas. The paintings were sold to raise money for conservation. Zoo officials say Mshindi had a wonderful personality.

"This is very hard for all of our staff. We'll miss him terribly, but we knew this was the right thing to do," Curator of Toyota Elephant Passage Dale Leeds said.

CBS Denver reports that the zoo explored many treatment options for Mshindi. While at first the rhino showed improvement, he stopped responding to the treatment in June.

"We watched Mshindi very closely and were optimistic about his recovery, but he was no longer responding to his treatment," Vice President of Veterinary Medicine Scott Larsen said.

CBS Denver explains that the name Mshindi means "warrior" or "champion" in Swahili. He was born at Denver Zoo in 1993 to parents, Lij and Rhinestone.

"He will be missed dearly," Larsen said.