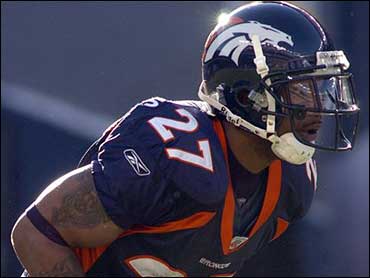 Broncos cornerback Darrent Williams was killed in a drive-by shooting early Monday after an argument at a nightclub,
his limousine sprayed with bullets in downtown Denver, according to police.

Team spokesman Jim Saccomano said police called him about 3 a.m. from the scene and told him three people had been shot, and the 24-year-old Williams, a former Oklahoma State star, had been killed. His death came hours after the Denver Broncos were eliminated from the playoff race.

A little after 2 a.m., a white Hummer limousine was fired on from a vehicle that pulled up along its side, police spokesman Sonny Jackson said. As many as a dozen bullet holes were visible on the driver's side of the vehicle. One window was blown out and four others had bullet holes.

Three people in the limo were hit and taken to St. Anthony
Central Hospital, Jackson said. Williams was pronounced dead.
The other man and woman who were shot were not identified.

Broncos coaches said Monday the incident may have begun at a bar where Williams and Broncos receiver Javon Walker got into an argument with some bar patrons, reported Reggie Rivers of KCNC-TV, the CBS affiliate in Denver.

The Broncos players left the bar and drove away in a limousine, and may have been followed by the gunmen, the coaches said.

Jackson said there was a dispute at a nightclub several blocks from the shooting where Williams and his group had attended a New Year's Eve party. He said the argument didn't specifically involve Williams, according to witnesses.

"Why this happened, we're not sure," Jackson said. "There was some confrontation between a group of people in the vehicle and a group at the nightclub."

Police were searching for a white Suburban or Tahoe they suspect
was involved. Jackson wouldn't identify any of the other passengers
nor would he confirm whether any other Broncos players were in the
vehicle at the time of the shooting, saying they were all
witnesses.

The club identified by police advertised a New Year's Eve event celebrating the birthday of Denver Nuggets star Kenyon Martin. Nuggets officials didn't immediately respond to questions about whether any of their players were involved.

The limo sat in a snowbank beside Speer Boulevard, a main street through downtown. Police and technicians worked amid snow and ice from recent storms, using small yellow plastic markers to indicate possible evidence.

Saccomano said he spoke with coach Mike Shanahan and others in the organization. Hours earlier, the Broncos lost to San Francisco
26-23 in overtime.

"It is a terrible tragedy," NFL spokesman Greg Aiello added. "We don't know all the details yet, but we are reaching out to the Broncos to offer our support."

The previous active NFL player to die was Thomas Herrion of San Francisco. He had a heart attack following an exhibition game in
Denver on Aug. 20, 2005.

Champ Bailey was among the Broncos players and staff members who gathered at Denver Health Medical Center, where Williams' body was taken.

"He had a big heart and a lot of courage," said Cedric Smith, assistant strength and conditioning coach. "It's a tragedy, a complete tragedy. It's sickening."

Williams teamed with Bailey to give Denver one of the NFL's top cornerback tandems. Williams finished the season with 88 tackles, 78 of them solo, and four interceptions.

Players and coaches were off Monday and were scheduled to meet Tuesday before heading home for the offseason.

On Sunday against the 49ers, Williams had three tackles and
returned two punts for 50 yards before leaving the game with a
shoulder injury late in the second half. After the game he said he
planned to wait a few weeks before deciding if he needed an
operation.

Williams, a second-round draft pick out of Oklahoma State in 2005, made an immediate impact on the Broncos. He started nine times in his rookie season following a stellar college career.

Anthony Criss, Williams' high school football coach in Fort Worth, Texas, spoke with the cornerback often, and as recently as two weeks ago.

"When he was younger, he always gravitated to the wrong crowd," Criss said. "I remember he went to church and the minister was talking to him about needing to pray and stop hanging around with the wrong people, and he started straightening up and doing the right thing."

In December, Williams spoke of returning to his hometown this offseason to talk to youngsters about staying out of gangs. Williams, who has two young children in the Fort Worth area, recently talked to Criss about establishing a free football camp for youth players.

"He had great compassion," Criss said. "He always wanted to try to make sure people did the right thing. He wanted to be a good parent, a good father, a good example for his kids. He will be missed."