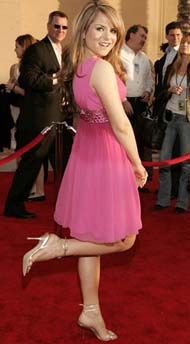 Comedian Dennis Miller running government instead of bashing it? Three GOP strategists interviewed by the Los Angeles Times in the last week said they want Miller, a registered Republican, to consider it.

One suggestion is to draft him as the GOP opponent to Democratic U.S. Sen. Barbara Boxer next year.

"There's a lot of us who'd like to see him campaign," said Rob Stutzman, a Republican consultant and spokesman for Arnold Schwarzenegger. "Dennis Miller is at the cutting edge of biting political commentary."

If he has any political aspirations, Miller so far is keeping them to himself.

That didn't keep Roy Behr, a spokesman for Boxer, from taking a pre-emptive shot at a candidacy by the Emmy-winning comedian and former "Monday Night Football" commentator.

"I think the public has always registered how they feel about Dennis Miller," he said. "And that's why he got booted off 'Monday Night Football.'"

The Times reported that Miller, a strong supporter of the U.S. invasion of Iraq, made two appearances on Schwarzenegger's behalf last week. He has also spoken at fundraisers for President Bush.