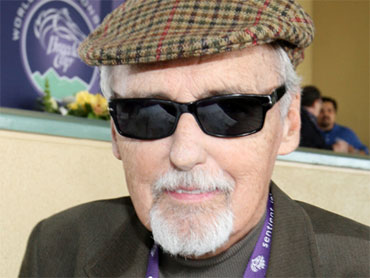 Despite a devastating battle with cancer that has reportedly left Dennis Hopper weighing barely 100 pounds, the actor is expected to appear Friday to accept a star on the Hollywood Walk of Fame.

For Hopper, it may be a walk of courage. According to court papers filed Wednesday in Los Angeles Superior Court, Hopper is now in a terminal struggle with prostate cancer and is unable to undergo chemotherapy. He can't handle stress or long conversations.

But according to CBS affiliate KCAL, Hopper's doctors say he has enough strength left to attend the unveiling of his star.

The "Easy Rider" star whose film career dates back to the 1950s is not only battling cancer, but his wife as well. Hopper won a restraining order against wife number five, Victoria Duffy, according to court documents obtained by TMZ. Duffy fired back that Hopper's children were trying to lock her out of his will, according to the Daily Beast.