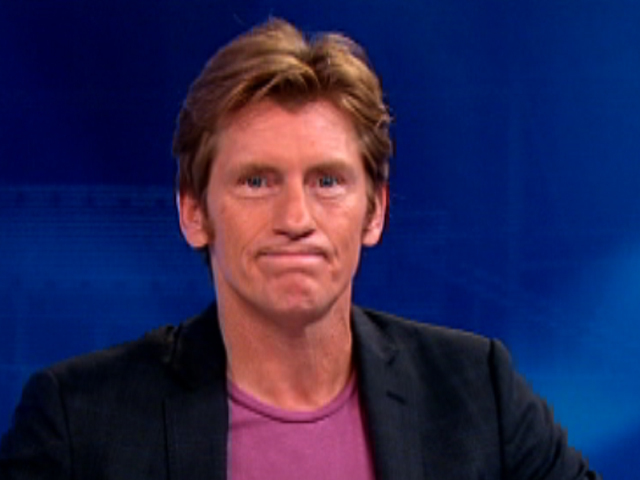 For seven seasons, Denis Leary played a tormented firefighter on "Rescue Me." But in real life, Leary has had the profession on his mind for some time. More than a decade ago, he created a foundation to raise money for fire departments.

Now, he's an executive producer of a documentary called "Burn," about the arson epidemic in Detroit, where 70,000 homes are vacant, and many of them are torched on a regular basis.

"Early Show" co-anchor Erica Hill noted the documentary was inspired by the death of Walter Harris, who lost his life fighting an arson fire in 2008 in Detroit.

Detroit, Hill said, is one of the areas with a fire department even more challenged than others around the country.

Leary said, "As everybody who has heard me talk about it probably knows, but just in case you haven't, every fire department in the United States in the major cities, they are all under duress financially, and the reason for that is because they never go on strike, and they never will. So, if the sanitation department goes on strike, eventually, our block smells and we all call the mayor's office, and then there's a lot of noise. Firefighters don't go on strike.

So, naturally they are the first people to be cut financially on the totem pole when there's a problem. In these times, you can imagine how difficult it is for any fire department. In Detroit, they were already under the gun. When the recession hit, it was 10 times worse. So this department (in the film) is financially strapped, and the amount of fires that are being set in that city is outrageous. And if you watch the trailer for the documentary when you go to the website, I mean, it's -- the footage is amazing that these people have captured. Some of these houses are going out and fighting 10 real fires a night. Sometimes they are actually at a fire and only a block away they see another fire start. So, I mean, starting out with very little money and not the right equipment, and then to be in the situation where they're at now."

Co-anchor Jeff Glor remarked, "One of the problems in Detroit, so many abandoned buildings and houses, but then occupied houses right next door. So the abandoned house might get set on fire."

Leary said, "The problem -- this is one of the beauties of firefighters -- they don't -- any situation, and this is an amazing thing, having played a fake firefighter on television, I came up against this -- they'll go to any building that they think people are in. So if it's a couple of homeless people, it doesn't matter. They're going to run in. That's what's happening here. They are pulling up to buildings that they know are abandoned but, because they know there may be squatters in the building, there might be people in there, they have to go in."

Hill said, "That is one of the incredible things about firefighters and one reason that they are and should always be seen as the heroes that they are is, they treat all of them the same. Because it's all about saving a life."

Leary said, "The circumstances they are all under now, especially in Detroit, they are pretty outrageous people. What they do for a living is amazing, anyways. When you get close to it, as I've had a chance to be, it makes it even more impressive what they do. And, you know why they do it. They are certainly not doing it for the money. They do it because it's a calling. It's a job that you are called to and that you really believe in, and the bravery and the courage are outstanding.

"What this department is going through now, one of the reasons I got involved is, I just think it's a glaring example of the financial distress but it's also -- it shows you what they do and, you know it doesn't ,matter what situation we're in, the first responders are always the fire department and any -- even on 9/11 here -- the first people that arrived were the firefighters. I just want to get them the right equipment and the right training facilities."

To help contribute to finishing the "Burn" documentary, visit Kickstarter, a website that helps fuel grassroots projects. A portion of the proceeds will go toward helping purchase equipment for firefighters in Detroit.

Leary added that one of the incentives to give is a set visit to "Boardwalk Empire."

He added, "('Burn') is a terrific movie, and we're very close (to finishing it). We're almost halfway. We need that much more to finish. So, I appreciate you guys helping us out."