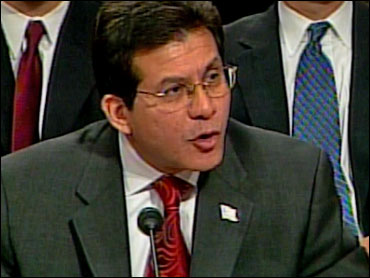 Thirty-one Senate Democrats on Thursday asked Attorney General Alberto Gonzales to remove himself from the investigation into the Jack Abramoff scandal, saying the lobbyist's dealings with President Bush and others in the administration should compel Gonzales to step aside.

"FBI officials have said the Abramoff investigation 'involves systemic corruption within the highest levels of government,"' the Democrats wrote in a letter to Gonzales. "In light of your previous service as White House Counsel and your close connection to many Administration officials, the appearance of conflict looms large."

The attorney general "can avoid any appearance of impropriety by recusing himself," said Sen. Charles Schumer of New York, one of the signers of the letter. "If there was ever a case that was both sensitive and rife with potential conflict — it is this one."

In response, Gonzales said that "we've got career prosecutors involved in this investigation as we do in all investigations; these are folks that are not motivated by any political agenda." The attorney general made the comment on Fox News Radio. Justice Department spokeswoman Tasia Scolinos said Gonzales has followed all department guidelines and there is "no reason for him to recuse himself from the investigation at this time."

New questions have arisen about Abramoff's ties to the White House since a photo emerged over the weekend showing Abramoff with Mr. Bush. The White House would not release the photo or any others that Mr. Bush had taken with Abramoff.

Mr. Bush has said that he, like all presidents, is frequently photographed with people at various events and that Abramoff is not a personal friend.

Also surfacing were the contents of an e-mail from Abramoff to Washingtonian magazine claiming he had met briefly with the president nearly a dozen times and that Mr. Bush knew him well enough to make joking references to Abramoff's family.

Three former associates of Abramoff told The Associated Press this week that the lobbyist frequently told them he had strong ties to the White House through presidential confidant Karl Rove.

David H. Safavian, Mr. Bush's former top procurement officer, is under indictment on five counts of obstructing investigations into whether he aided Abramoff in efforts to acquire property around the nation's capital controlled by the General Services Administration.