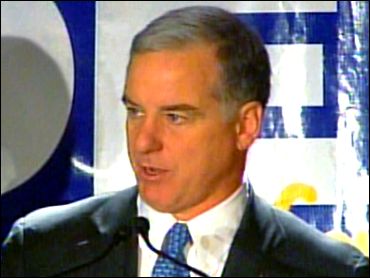 "The capture of Saddam Hussein hasn't made America safer," the former Vermont governor said in direct contradiction of the president.

Dean and two other Democratic presidential candidates delivered speeches that sought to pivot from Saddam's capture to new ground for criticizing the Republicans' foreign policies. Sen. John Edwards of North Carolina and Wesley Clark joined Dean in saying Saddam's capture gives the United States a chance to correct the course in Iraq.

Capitalizing on the powers of incumbency, Mr. Bush overshadowed his rivals' criticism with a hastily arranged news conference in which he discussed Saddam's capture and dismissed questions about his 2004 re-election campaign.

"There will be plenty of time for politics" after the turn of the year, he said. Mr. Bush called it an "absurd insinuation" to raise questions, as Dean did recently, about whether the president had advance knowledge of the Sept. 11 attacks.

The capture posed a special problem for front-runner Dean, whose candidacy has been fueled by his opposition to the war. Many supporters saw his defiance of the president on Iraq as emblematic of his willingness to stand up to Mr. Bush while other Democrats fell in line behind the Republican president.

Dean did not back away from his opposition to the war, but he sought in many ways to ease concerns about his thin foreign policy credentials.

"Let me be clear: My position on the war has not changed," Dean said in an address to the Pacific Council in Los Angeles.

"The difficulties and tragedies we have faced in Iraq show that the administration launched the war in the wrong way, at the wrong time, with inadequate planning, insufficient help, and at unbelievable cost," the former Vermont governor said. "An administration prepared to work with others in true partnership might have been able, if it found no alternative to Saddam's ouster, to then rebuild Iraq with far less cost and risk."

Edwards, who supported the Bush-backed congressional war resolution, zeroed in on what he said is a greater threat than any posed by Saddam: the spread of weapons of mass destruction.

"It was great news for the Iraqi people, the world, and the United States that Saddam Hussein was captured. But that alone is no substitute for a comprehensive strategy to deal with the world's most dangerous weapons, no matter how welcome the news," Edwards said in a text of his address in Iowa, site of the Jan. 19 caucuses.

Clark, speaking from The Hague where he testified in the U.N. war crimes trial of former Yugoslav President Slobodan Milosevic, said Saddam's capture "doesn't change the challenge we face there. The war is not over."

He called on Mr. Bush to work more closely with U.S. allies, particularly NATO, to fight terrorism. "Iraq is still in danger of becoming a failed state," Clark said in a text of his address. "A failed state would be a stunning success for al Qaeda."

Besides the presidential candidates, New York Sen. Hillary Rodham Clinton called for a new international authority to help ease the transition of power to Iraqis. Clinton, whom many Democrats consider a likely presidential candidate in 2008, echoed this year's candidates in qualifying her praise for the capture of Saddam.

"This moment, however, cannot be just about congratulating ourselves," she said in a speech in New York, arguing the U.S. government has "a new opportunity" to internationalize the rebuilding effort by forming a new power structure.

Democrats have been hammering Mr. Bush for failing to capture Saddam and Osama bin Laden, despite months of manhunts. The arrest of Saddam eliminated one symbol of the president's failings, but several of the Democrats argued the goal could have been met in less time if a different president were in office.

In his address, Dean pledged to bolster U.S. troops, particularly terrorism-fighting special forces. He would work with allies to spread the cost and risks of battling terrorists, Dean said, and focus on efforts to stem the flow of weapons of mass destruction.

Even before the address, Dean's campaign announced a list of prominent foreign affairs advisers, including Anthony Lake, national security adviser under in the Clinton White House.

Both Dean and Edwards proposed tripling the amount of U.S. money spent to secure Russia's nuclear arsenal, and Edwards said he would appoint a proliferation czar to oversee the issue.

Titled "Strategy of prevention, not pre-emption," Edwards' address urges President Bush to reverse plans to try Saddam through the U.S.-selected Iraqi Governing Council. The North Carolina senator also urged Bush to reverse an order denying lucrative reconstruction contracts to nations that did not back the war.

On nuclear proliferation, Edwards said he would convene a world summit to create a Global Nuclear Compact that reinforces the Nuclear Non-Proliferation Treaty. Nations that opt out of the pact or violate its anti-proliferation rules would be subject to strong, immediate penalties aimed at their military capabilities.

"To win the global war on terror, America does not need a new doctrine of pre-emption; we need a new strategy of prevention," he said.