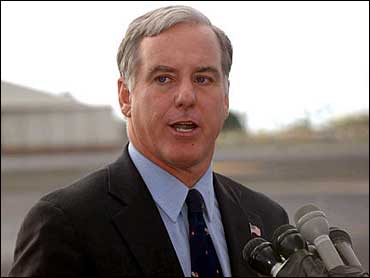 Democratic presidential candidates welcomed news Sunday of Saddam Hussein's capture, saying the arrest of Iraq's former dictator marked a great day for U.S. soldiers, the people of Iraq and of the world.

"I supported this effort in Iraq without regard for the political consequences because it was the right thing to do," Missouri Rep. Dick Gephardt said in a statement from Sumter, S.C., where he was campaigning. "I still feel that way now, and today is a major step toward stabilizing Iraq and building a new democracy."

Massachusetts Sen. John Kerry, who supported the Iraq war but has become increasingly critical of its aftermath, also looked to the future.

"Capturing Saddam Hussein and ensuring that this brutal dictator will never return to power is an important step toward stabilizing Iraq for the Iraqis," Kerry said in a statement from Iowa.

He also urged the Bush administration to involve more U.S. allies in the rebuilding of Iraq and criticized a Pentagon memo that prohibited companies from countries that did not provide troops for the war from bidding on lucrative reconstruction contracts there.

"We need to share the burden, bring in other countries and make it clear to the world that Iraq belongs to the Iraqi people," Kerry said.

"I hope this will see a diminishing in the violence against American soldiers in Iraq," Clark said as he arrived in the Netherlands. Clark was on his way to The Hague, to testify in the war crimes trial of former Yugoslav President Slobodan Milosevic.

Howard Dean, one of the most critical candidates of Mr. Bush's policy, said in West Palm Beach, Fla., that he expected the capture to change "the course of the occupation of Iraq."

North Carolina Sen. John Edwards praised the U.S. forces in Iraq and called for greater involvement by U.S. allies in the country's reconstruction.

"We are all so proud of their efforts not just today, but every day as they work tirelessly to bring democracy to Iraq," Edwards said. "I hope President Bush will use this opportunity to chart a course in Iraq that will bring in our allies in a meaningful way to achieve a democratic and peaceful Iraq."

"This is something that I have been working on with a lot of other people, advocating and praying for, for more than 12 years since the Gulf War of '91," he said on NBC's "Meet the Press." Lieberman also called it a "day of triumph and joy for anybody in the world who cares about freedom and human rights and peace."

But Carol Moseley Braun said that while it was good news, Saddam's arrest "does not change the fact that our troops remain in harm's way and we are no closer to bringing them home."

"I am glad he was captured alive so he can be brought before the bar of justice," Mr. Clinton said Sunday in a statement.

Senate Democratic Leader Tom Daschle called it "a great day for the Iraqi people," and said "Capturing this brutal dictator represents a significant step toward bringing about the kind of Iraq we and the majority of the Iraqi people seek."