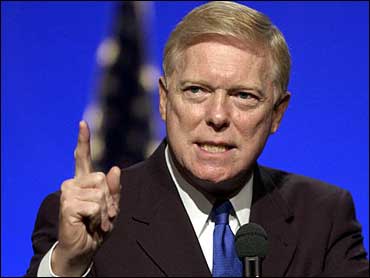 "We should be ready for revenge!" former U.S. Rep. Carrie Meek implored a
cheering, whistling crowd of state Democratic convention delegates. The
party's presidential candidates promised to do just that.

"There is only one way to fix the problem," he said. "We've got to make
George Bush vanish."

Meeting amid the resorts and amusements of Disney World, the Democrats were
hearing from five other candidates in the November 2004 presidential
elections: front-runner Howard Dean, retired Army Gen. Wesley Clark, Rep.
Dennis Kucinich of Ohio and Sens. John Edwards of North Carolina and John
Kerry of Massachusetts.

The Supreme Court halted the 2000 recount of Florida ballots after five
weeks, with Bush ahead of Al Gore by just 537 votes out of 6 million cast.
The state's 25 electoral votes put Bush in the White House.

Democratic leaders hope memories of Gore's narrow defeat will inspire liberal
voters to turn out in record numbers against the Republican president.

Ralph Reed, a Republican strategist who was defending Bush in hallway
interviews, said the Democrats' strategy of political vengeance will fail as
it did in 2002, when Florida Gov. Jeb Bush - the president's brother - was
re-elected despite McAuliffe's promise to defeat him.

"People want their leaders ... to talk about the future. They don't want
anger and pessimism and personal attacks. They want a positive vision from
leaders looking forward," Reed said.