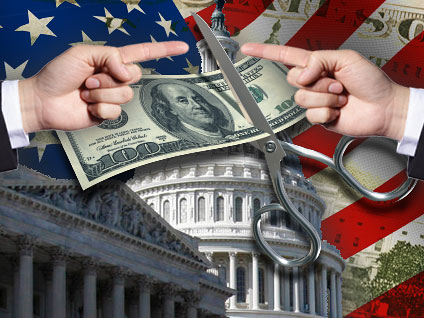 Democrats in Congress want to extend those tax breaks for individuals making under $200,000 each year and couples making under $250,000 while letting the others expire. Their plan is to permanently extend tax cuts for taxpayers falling in the 10, 25 and 28 percent tax brackets. Taxpayers falling in the 33 percent bracket move up to 35 if they make over $250,000 as a family. The 35 percent bracket then goes up to 39 percent.

Republicans are calling that the largest tax increase in U.S. history and are calling for an extension of all the tax cuts. But Democrats counter that extending tax cuts for the wealthy is fiscally irresponsible, costing $700 billion, and doesn't create jobs.

One Democratic aide on the House tax writing committee says that it's fair to assume that if you are a family making less than $250,000, you will not pay any new taxes and will be eligible for the same tax breaks in 2011 as you are in 2010. That includes tax breaks on dividends and capital gains and child tax credits.

But how the debate will play out during the midterm campaign season is still an unknown. Democrats plan for the Senate to tackle the issue first when Congress returns from the summer recess next month, and House Democrats say they want to vote on the extension before the elections. Whether that can be achieved is anyone's guess.

Until then, here's a primer on the key fault lines of the debate.

The big debate this fall will likely be over what impact raising taxes for the upper two tax brackets will have on small businesses and the economy.

That 3 percent, which is backed up by the Joint Committee on Taxation, is a red herring according to American Enterprise Institute Resident Scholar Alan Viard.

"The number is correct but is meaningless" Viard told CBS News. "Over 40 percent of the income of non-corporate businesses is owned at those levels and that's the relevant number. We don't care about the number of firms, or the number of owners, we care about the volume of investment that's being affected."

Viard argues that raising taxes on business will impact small businesses by making it more difficult to get financing.

Impact on the economy:

The Joint Committee on Taxation wrote in prepared testimony before Congress that raising marginal tax rates on upper income taxpayers will "correspondingly reduce incentives for these taxpayers to work, to save, and to invest." They also pointed out that the opposite is the case for families and individuals making under $250,000 and $200,000, meaning they will have more incentive to work, save and invest.

"I think certainty is key, so I would lay out exactly what the tax rates will be" Zandi said, saying Congress should extend all tax cuts for one year and then lay phase out the upper income tax cuts in following years based on economic conditions.

Republicans claim that raising tax rates at all will continue to discourage businesses from hiring workers when unemployment is stuck at 9.5 percent. Democrats respond by pointing to this CBO testimony that found reducing income taxes was the least effective option to boost employment.

Geithner said that cutting taxes for the top 2 percent of Americans will help the economy recover by showing the rest of the world that the United States is taking steps to reduce the debt.

"Permanently extending the tax cuts for the top 2 percent would require us to borrow over $700 billion dollars more over the next decade, adding significantly to an already unsustainable level of debt," he said.