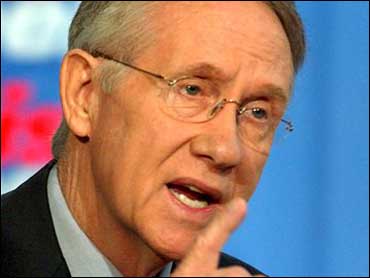 The Senate is now back in public session after more than two hours behind closed doors.

The unusual private session was prompted by Democrats unhappy that Republicans haven't investigated intelligence used by the administration that led to the war in Iraq.

Immediately after returning to public session, Senate Intelligence Committee Chairman Pat Roberts says Republicans have "agreed to do what we agreed to do."

Democrats forced the Republican-controlled Senate into an unusual closed session Tuesday, questioning intelligence that President Bush used in the run-up to the war in Iraq and accusing Republicans of ignoring the issue.

"They have repeatedly chosen to protect the Republican administration rather than get to the bottom of what happened and why," Democratic leader Harry Reid said.

Taken by surprise, Republicans derided the move as a political stunt.

"The United States Senate has been hijacked by the Democratic leadership," said Majority Leader Bill Frist. "They have no convictions, they have no principles, they have no ideas," the Republican leader said.

In a speech on the Senate floor, Reid demanded the Senate go into closed session. The public was ordered out of the chamber, the lights were dimmed, and the doors were closed. No vote is required in such circumstances.

Reid's move shone a spotlight on the continuing controversy over intelligence that President Bush cited in the run-up to the war in Iraq. Despite prewar claims, no weapons of mass destruction have been found in Iraq, and some Democrats have accused the administration of manipulating the information that was in their possession.

CBS News correspondent Bob Fuss reports that Democrats say the indictment of Vice President Dick Cheney's chief of staff, I. Lewis "Scooter" Libby brings the issue into the forefront. Fuss reports that no one can remember the last time the Senate rule was used this way — to grab control of the Senate to discuss an issue the majority party does not want to discuss.

Libby was indicted last Friday in an investigation that touched on the war, the leak of the identity of a CIA official married to a critic of the administration's Iraq policy.

"The Libby indictment provides a window into what this is really all about, how this administration manufactured and manipulated intelligence in order to sell the war in Iraq and attempted to destroy those who dared to challenge its actions," Reid said before invoking Senate rules that led to the closed session.

Libby resigned from his White House post after being indicted on charges of obstruction of justice, making false statements and perjury.

Democrats contend that the unmasking of Valerie Plame was retribution for her husband, Joseph Wilson, publicly challenging the Bush administration's contention that Iraq was seeking to purchase uranium from Africa. That claim was part of the White House's justification for going to war.

Sen. Trent Lott, R-Miss., said Reid was making "some sort of stink about Scooter Libby and the CIA leak."

A former majority leader, Lott said a closed session was appropriate for such overarching matters as impeachment and chemical weapons — the two topics that last sent the senators into such sessions.

In addition, Lott said, Reid's move violated the Senate's tradition of courtesy and consent. But there was nothing in Senate rules enabling Republicans to thwart Reid's effort.

As Reid spoke, Frist met in the back of the chamber with a half-dozen senior GOP senators, including Intelligence Committee Chairman Pat Roberts of Kansas, who bore the brunt of Reid's criticism. Reid said Roberts reneged on a promise to fully investigate whether the administration exaggerated and manipulated intelligence leading up to the war.