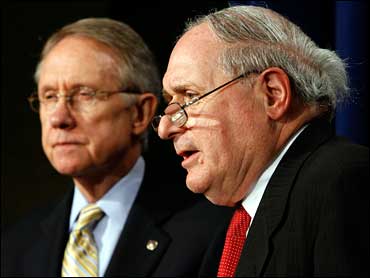 Frustrated Senate Democrats failed again Thursday to pass a measure to force President Bush to withdraw American forces from Iraq, which is what they believe the voters want them to do, reports CBS News correspondent Bob Fuss.

"We're going to continue to lose lives and squander resources while they (the Iraqis) dawdle," said Sen. Carl Levin, D-Mich., who sponsored the bill.

Republicans blocked the measure, which would have ordered most U.S. troops home in nine months, contending it would have dire consequences for the region and usurp control of the war from seasoned war generals on the ground there.

Last week, Gen. David Petraeus, the top U.S. military commander in Iraq, recommended to Congress and President Bush that some 130,000 troops be kept there through next summer - a slight decrease from the more than 160,000 troops there now.

"It would be a very overt rejection of Gen. Petraeus' leadership," said Sen. Lindsey Graham, R-S.C. The military commanders "have earned the ability to carry on their mission," he said at another point.

Petraeus' Capitol Hill testimony is widely seen as a primary factor in shoring up support among Republicans, which had deteriorated steadily throughout summer. While still nervous about the ongoing violence in Iraq and unpopularity of the war, many GOP members say they now remain hopeful that another year of combat will stabilize Iraq and prevent U.S. troops from returning to the region a decade later.

"If we leave, we will be back - in Iraq and elsewhere - in many more desperate fights to protect our security and at an even greater cost in American lives and treasure," said Sen. John McCain, R-Ariz., a presidential candidate and the top Republican on the Armed Services Committee.

Frustrated by the lack of Republicans willing to break ranks, Democrats this week abandoned attempts to reach a bipartisan compromise on Levin's legislation. Levin had said he would have been willing to turn the nine-month date into a goal for troop withdrawals, rather than a mandated deadline.

Senate Majority Leader Harry Reid said Republicans are speaking out against the war but then voting to continue it, reports Fuss.

"Back home they assert their independence, but in Washington they walk in lockstep with the president and continue to support his failed policies," said Reid, D-Nev.

Recent polls show that American views of the war largely have not changed since Petraeus appeared before congressional committees two days last week.

A poll released this week by the nonpartisan Pew Research Center found that 54 percent of Americans still favor bringing troops home as soon as possible. And despite slight improvements in the public's view of military progress, more said the U.S. will likely fail in Iraq than succeed - by 47 percent to 42 percent - about the same margin as in July.

Friday's vote finished a week of disappointments for Democrats.

On Wednesday, the Senate blocked legislation by Sen. Jim Webb, D-Va., that would have guaranteed troops more time at home; it fell by a 56-44 vote with 60 votes needed to advance. On Thursday, the Senate blocked legislation sponsored by Reid and Sen. Russ Feingold, D-Wis., that would have cut off funding for combat in June 2008. That measure failed by a 70-28 vote, 32 votes short of 60.

On Thursday, Republicans successfully pushed through a resolution condemning an advertisement by the liberal activist group MoveOn.org. Displayed in The New York Times, the ad taunted Petraeus as "General Betray Us."

The resolution, sponsored by Sen. John Cornyn, R-Texas, passed by a 72-25 vote.

"These are the priorities of the American people," he said.