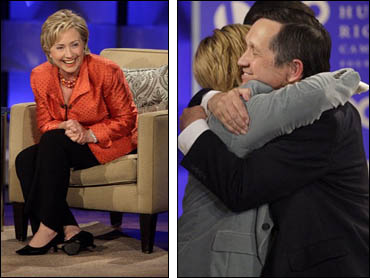 Democratic presidential contenders sought to underscore their differences with Republicans on gay and lesbian rights, but leading candidates also faced sharp questions on their reluctance to embrace marriage for same-sex couples.

In a forum Thursday night focusing on gay issues sponsored by a gay-rights organization and aired on a gay-oriented cable channel, Sen. Barack Obama argued that civil unions for same-sex couples wouldn't be a "lesser thing" than marriage. He disputed that his position on same-sex marriage made him a vestige of the past rather than an agent of change.

Obama belongs to the United Church of Christ, which supports gay marriage, but Obama has yet to go that far.

"If we have a situation in which civil unions are fully enforced, are widely recognized, people have civil rights under the law, then my sense is that's enormous progress," Obama said.

New Mexico Gov. Bill Richardson said the nation was on "a path to full inclusion" but added, "In my judgment, what is achievable is civil unions with full marriage rights."

Sen. Hillary Rodham Clinton echoed support for civil unions. "I will be a president who will fight for you," she said.

But she also said she made a mistake in March when she steered around a question on whether homosexuality was immoral. She was asked about it at the time after Gen. Peter Pace, chairman of the Joint Chiefs of Staff, said he considered homosexual acts immoral and similar to adultery. He later said he should have not expressed his personal views. Clinton later issued a statement saying she did not think being gay was immoral.

"It was a mistake," Clinton said. "I should have put it in a broader context."

Six of the eight Democratic candidates for the 2008 election answered questions at an event described as a milestone by organizers. It marked the first time that major presidential candidates appeared on TV specifically to address gay issues, organizers said.

Obama called the event "a historic moment ... for America."

The two-hour forum, held in a Hollywood studio with an invited audience of 200, was co-sponsored by the Human Rights Campaign, a gay-rights group active in Democratic politics, and Logo, a gay-oriented cable TV channel that aired the forum live.

"Tonight was an important night in the fight for equality," Human Rights Campaign President Joe Solmonese, who was on a panel posing questions to the candidates, said in a statement.

"Unfortunately, we have more work to do. The overwhelming majority of the candidates do not support marriage equality. While we heard very strong commitments to civil unions and equality in federal rights and benefits, their reasons for opposing equality in civil marriage tonight became even less clear."

Of the eight Democratic candidates, two did not attend, Sens. Joe Biden and Chris Dodd.

The candidates, who appeared one at a time and sat in an upholstered chair, took questions from a panel that also included singer Melissa Etheridge and Washington Post editorial writer Jonathan Capehart.

Clinton was cheered by the crowd when she alluded to the prospect for change at the White House in the 2008 election. Former Sen. John Edwards argued that Democrats must speak out against discrimination coming from the other party.

Unless you speak out against intolerance, it becomes "OK for the Republicans in their politics to divide America and use hate-mongering to separate us," Edwards said.

All of the Democratic candidates support a federal ban on anti-gay job discrimination, want to repeal the "don't ask, don't tell" policy barring gays from serving openly in the military and support civil unions that would extend marriage-like rights to same-sex couples.

A majority of Americans oppose nationwide recognition of same-sex marriage and only two of the Democrats support it - former Sen. Mike Gravel and Rep. Dennis Kucinich, both longshots for the nomination.

The forum brought some of those distinctions into focus.

When Kucinich was asked whether there was anything on the agenda for gay and lesbian rights he did not support, he paused and said, "All I can say is, keep those contributions coming ... and you'll have the president that you want."

In a statement clearly aimed at the leading Democrats in the field, he said his support for same-sex marriage was "a question of whether you really believe in equality."

The forum provided some moments that challenged the candidates to talk about issues that do not often arise in a campaign dominated by the Iraq war.

Etheridge, speaking to Edwards, said she had heard he once said he felt uncomfortable around gay people - an assertion contained in longtime political strategist Bob Shrum's book "No Excuses: Concessions of a Serial Campaigner."

"I'm perfectly comfortable," Edwards said. "I know where it came from. It came from a political consultant. And he's just wrong."

Richardson was asked about a remark he made on Don Imus' syndicated radio program on March 29, 2006, when he used a Spanish word that some contend is a slur against homosexuals - "maricon." He later said he was being playful but apologized to anyone who was offended.

"I meant no harm when I said that," the governor said. "I was caught off guard."

When asked by Etheridge whether "homosexuality is a choice or is it biological?," he said, "I don't see this as an issue of science or definition. I see gays and lesbians as human beings."

Richardson later elaborated in a statement issued by his campaign:

"Let me be clear - I do not believe that sexual orientation or gender identity happen by choice," Richardson said. "But I'm not a scientist, and the point I was trying to make is that no matter how it happens, we are all equal and should be treated that way under the law."

Logo, available in about 27 million homes, wanted to hold a second forum for Republican candidates but front-runners in that party showed no interest, channel officials said.