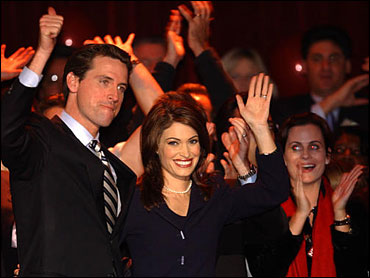 Democrat Gavin Newsom fended off a strong Green Party challenger in the race for mayor, becoming the youngest person to head the city in more than a century and preserving control of a post that Democrats couldn't afford to lose.

Newsom, a wealthy restaurateur backed by most of the city's political establishment, received 118,651 votes, or 53 percent, in Tuesday's runoff election. The Greens' Matt Gonzalez, a city supervisor and former public defender who surrounded himself with artists, activists and earnest volunteers, got 107,030 votes, or 47 percent.

"This feels pretty good, doesn't it?" Newsom said in his victory speech. "There's a reason why we are the shining light for the rest of the state and the nation, and it's the extraordinary diversity of San Francisco."

As many as 20,000 absentee and provisional ballots remained to be counted, but Gonzalez conceded defeat after the election, which drew a 50 percent voter turnout and a record number of absentee ballots.

At 36, Newsom is the youngest person to become mayor of San Francisco since 1897.

Brown, 69, appointed Newsom to the city's governing Board of Supervisors and personally invited former President Clinton to campaign for him when the race appeared tight. Brown exulted in his protege's victory Tuesday night, then slipped away from the victory party before Newsom took the stage.

In the end, Gonzalez's insurgent campaign was overwhelmed by Newsom's superior financial and organizational efforts. Newsom's campaign collected more than $3.6 million for the race, outspending Gonzalez by more than 8-1 and overwhelming the Greens' volunteer-driven effort.

Coming so soon after Republican Arnold Schwarzenegger's election as governor, Newsom's victory is a relief for Democrats who feared another embarrassing loss - this time in a city the party has controlled for decades.

Still, with Democrats representing 54 percent of the registered voters and Greens 3 percent, Gonzalez said his 47 percent showing should send a message to the two major parties that voters will respond to candidates willing to take on the political establishment.

"This city really represents the most American of American values," Gonzalez said in his concession speech. "I think the Democratic party and other parties ought to acknowledge that people voted for a candidate outside their party because that candidate represented their values."

Gonzalez, a former Democrat who switched parties three years ago, fueled his campaign with the frustration felt by many hard-core liberals over the pro-development direction the city took under the autocratic Brown. Newsom portrayed Gonzalez as an ideologue lacking the will and practical ideas for creating jobs, housing and a renewed sense of well-being in a city hit hard after the dot-com bust.

Gonzalez will continue to serve as president of the Board of Supervisors. While Newsom will name his own replacement and vowed Tuesday night to build bridges to the many Gonzalez voters, he may have to work hard as mayor to get majority support for his policies from the board, where most of the supervisors were solidly against Brown.