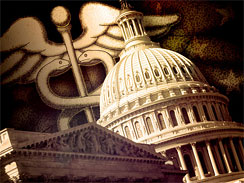 The year-long battle to dramatically change the nation's ailing health care system may be coming to an end. House and Senate Democratic leaders are confident they are very close to passing health care reform.

CBS News chief White House correspondent Chip Reid reports that Democrats seem to think they are closer than they've ever been and are confident it is going to pass in the next couple of weeks.

But one thing House Democrats are really worried about, says Reid, is that they will pass the bill, be out there with what to some is a politically unpopular vote, and then the Senate will fail to pass it.

When asked this morning on "The Saturday Early Show" if he believes the Senate is trustworthy, Rep. Anthony Wiener, D-N.Y., said that in the past the House has passed bills which the Senate has "let die" 290 times.

"There have been many cases where it's been problematic, sometimes because of their rules or they're just institutionally that way," Weiner said. "But 'fool me once, shame on me; fool me 290 times, shame on us.'"

So the Senate will have to provide real assurances - as Reid points out, "sign in blood that they are going to pass this thing."

But by using the reconciliation process, which eliminates the possibility of delays from a Republican filibuster and requires a simple 51 vote majority to pass, Democrats believe that they can win passage and get the bill to the president's desk in about two weeks.

They may have a majority in both Congressional houses, but Reid says Democrats are "incredibly nervous.

"They are quivering in their boots," he said. "But what the White House is doing now is trying to calm them in two ways: Number one, saying you're better off passing something than nothing. If you go home and say we simply failed that is the worst thing you can do. Also the White House is circulating polls on Capitol Hill that show that instead of this being unpopular, now finally it's about even, that the support for health care reform is on the rise."

It now appears likely the House will vote on the Senate's version of the health care bill late next week . . . so late, in fact, that President Obama will delay his upcoming trip to Asia in order to help push for the necessary votes here at home.

"This came about as a result of a conversation that the president had with Speaker Pelosi and Majority Leader Reid," White House Spokesman Robert Gibbs said Friday. "All three agreed it would be helpful to have a few extra days here."

House Democrats hope to vote on the Senate's version of the bill by next Saturday, followed by a reconciliation bill that makes changes, and that can be passed by the Senate with only 51 votes instead of 60.

Among the thorniest issues: Funding for insurance that would pay for abortions.

"Catholic bishops stand very much against this language, and I stand with them," said Rep. Eric Cantor, R-Va.

Still, Democrats are feeling more confident they can get the bill through.

"It won't be long before we'll be making a real difference in the lives of the American people," said Speaker Nancy Pelosi.

Passage may also make a difference for Democrats come November.

"It's important to pass healthcare because the president and the Democratic Party need to show that they can do something, and the president has said his power and prestige is at stake here," said CBS News political consultant John Dickerson.