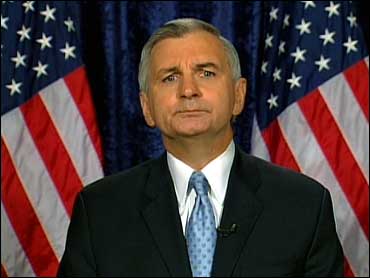 Sen. Jack Reed of Rhode Island delivered the Democratic response to Mr. Bush's prime-time Oval office address. The former Army Ranger said the president has failed to provide "either a plan to successfully end the war or a convincing rationale to continue it."

"The President rightfully invoked the valor of our troops in his speech, but his plan does not amount to real change," Reed said.

Mr. Bush announced that 5,700 U.S. troops could be home by Christmas and that four brigades - at least 21,500 troops - could return by July.

The president rightfully invoked the valor of our troops in his speech, but his plan does not amount to real change, Reed said.

"Soldiers take a solemn oath to protect our nation, and we have a solemn responsibility to send them into battle only with clear and achievable missions," Reed said.

Reed added that Democrats would work to "profoundly change" the U.S. military involvement in Iraq.

"An endless and unlimited military presence in Iraq is not an option," he said. "Democrats and Republicans in Congress and throughout the nation can not and must not stand idly by while our interests throughout the world are undermined and our Armed Forces are stretched toward the breaking point."

Senate Democrats have been discussing legislation to limit the mission. U.S. troops would be restricted to training Iraq's military and police, protecting U.S. assets and fighting terrorists.