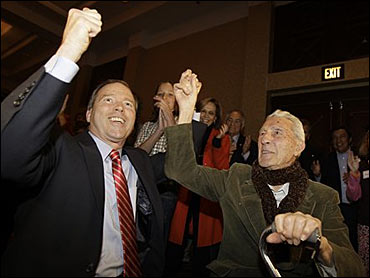 CBS News projects that the Democrats will pick up at least five GOP seats, giving them an effective majority of at least 56, including those held by two independents. Sixty seats are needed for a filibuster-proof majority that would preclude Republicans from blocking legislation.

They did not turn over a single seat to Republicans. All Democratic incumbents on the ballot prevailed.

But four races had yet to be decided early Wednesday.

Georgia Sen. Saxby Chambliss could be headed for a special runoff in his reelection bid against Democratic challenger Jim Martin and third party candidate Allen Buckley.

Chambliss needs 50 percent-plus-one of the votes to avoid a runoff. With thousands of absentee ballots still being counted Wednesday morning, Chambliss has fallen below the 50-percent mark, according to the AP.

Martin will host a news conference later this morning to outline his plans. (Click here for live Georgia results)

In Minnesota, the contest between Republican Norm Coleman and challenger Al Franken, the former "Saturday Night Live" writer, was so close (approximately three one-hundredths of a percent) that a recount is mandatory. The race also included a significant third-party candidate, Independent Dean Barkley. (Click here for live Minnesota results)

Coleman leads Franken by a few hundred votes out of nearly 2.9 million cast. Under state law, an automatic recount is triggered when the difference between candidates is less than 0.5%.

Minnesota's Secretary of State Mark Ritchie said a recount wouldn't begin until mid-November at the earliest (that's when the canvassing board meets) and could drag on until December.

Franken is not conceding the Minnesota Senate race to incumbent Coleman, and on Wednesday morning said the race is still close to call.

"We won't know for a little while who won the race," Franken said, "but at the end of the day we will know that the voice of the electorate was clearly heard. There is reason to believe that the recount could change the vote tally significantly."

He also raised the possibility of voter irregularities.

"Our office and the Obama campaign have received reports of irregularities at various precincts around the state," Franken said. "We are lucky enough to live in a state with built-in protections to ensure that in close elections like these, the will of the people is accurately reflected in the outcome.

"This has been a long campaign, and it's going to be a little longer before we have a winner."

Sen. Ted Stevens, R-Alaska. Stevens, at 84, the longest serving Republican in Senate history, sought re-election despite calls from GOP leaders to resign after he was convicted last week of seven counts of lying on Senate financial disclosure forms. He was locked in a tight contest with Democrat Mark Begich, the mayor of Anchorage. (Click here for live Alaska results)

Republican Sen. Gordon Smith in Oregon was also on the list of Democratic targets. (Click here for live Oregon results)

In North Carolina, Kay Hagan ousted the incumbent, Dole, after a bitter contest that featured some intensely negative campaigning, including a Dole ad implying Hagan was an atheist. (Click here for live North Carolina results)

"Kay Hagan's victory tonight in the North Carolina Senate race was sweet, indeed. The seat was once held by Jesse Helms, the bete noir of the Democratic party," Dee Dee Myers, who served as former President Bill Clinton's press secretary, told CBSNews.com. "And Hagan's win - and Obama's impressive showing - suggest the state, like many part of the country, is changing. It's becoming increasingly friendly for Democrats running for local, state and national office."

Democrat Mark Warner breezed to victory in Virginia against Jim Gilmore in a matchup that pitted two former governors against each other for the seat of retiring Sen. John Warner. (Click here for live Virginia results)

"Winston Churchill once said that the most exhilarating feeling in life is to be shot at - and missed," McConnell said late Tuesday. "After the last few months, I think what he really meant to say is that there's nothing more exhausting."

"It's been a really good night," Reid said in an interview with The Associated Press. "Obama ran a terrific campaign, he inspired millions of people."

In a tight Mississippi contest, Republican Roger Wicker, defeated former Democratic Gov. Ronnie Musgrove to serve another four years of the term originally won in 2006 by Lott. Wicker was appointed to the post temporarily after Lott stepped down.

Democrats had counted on a slumping economy, an unpopular war and voter fatigue after eight years of President Bush to bolster a razor-thin 51-49 effective majority they've had the past two years after adding six seats in 2006.

Having a majority in the high 50s will enable Democrats to exercise far more control than they have now, since some Republicans probably would join them in efforts to break Senate logjams on many bills and judicial appointments.

Included in the Democrats' majority are two holdover independents, Bernie Sanders of Vermont and Joe Lieberman of Connecticut, who have voted with them for the most part over the past two years. However, Lieberman, the Democrat's vice presidential nominee in 2000, spent most of 2008 campaigning for McCain.

It was unclear even to Senate leaders Tuesday night whether Lieberman would continue to caucus with the Democrats or keep his chairmanship of the Senate Homeland Security committee. Reid said in the interview that he'll discuss the matter with the Connecticut senator later this week.

Democrats will lose two incumbents: Obama and Biden. Democratic governors in Illinois and Delaware are sure to appoint Democrats to replace them.

Democrats had fewer seats to defend than Republicans. Of the 35 races on Tuesday's ballot, 23 were held by Republicans, 12 by Democrats.

Republicans also held the Idaho seat of Sen. Larry Craig, who decided not to run for re-election after he was caught last year in a men's room sting. Idaho Lt. Gov. Jim Risch won the seat.