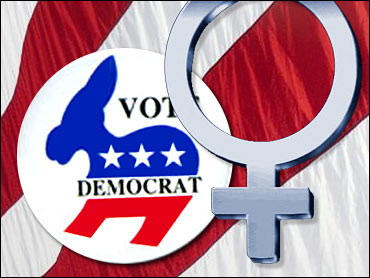 Democratic presidential candidates, courting female voters in their fight for the party's nomination, condemned President Bush's policies on the economy and terrorism, and pilloried his judicial nominations. Each claimed to be the White House's harshest critic.

"I don't think we can win this race without standing up to the president," said former Vermont Gov. Howard Dean on Tuesday.

The tough-on-Bush rhetoric coursed through every speech delivered by eight of the nine presidential candidates at a gathering sponsored by EMILY's List, the political organization that recruits and funds Democratic women who favor abortion rights. One by one, the White House hopefuls accused each other of not being tough enough on Mr. Bush.

The candidates saved their harshest attacks for Mr. Bush's nominees for the federal courts and warned that if Democrats don't stand firm, the Republican president eventually will tip the balance on the Supreme Court, leading to an overturning of the 1973 landmark decision legalizing abortion.

"These judges, some of these judges, that come out of the White House, they will take your rights away," said Sen. John Edwards of North Carolina.

"If we as Democrats don't show the backbone to stand up to that, we don't stand for anything," said Edwards, the only Democratic hopeful who is a member of the Senate Judiciary Committee.

Edwards' colleague in the Senate, Joe Lieberman of Connecticut, told the crowd, "I have been pro-choice my entire career," a subtle reference to two of his rivals, Democratic Representatives Dick Gephardt of Missouri and Dennis Kucinich of Ohio. In the past, the two have voted for legislation that would impose some limits on abortion.

Gephardt warned that women will "lose choice" on the issue of abortion if Mr. Bush were allowed to appoint his judges to the high court. He did not refer to his evolution on the issue.

Carol Moseley Braun said her status as the only female candidate in the crowded Democratic field should make her a favorite of the group. The former Illinois senator said securing the nomination would be a "giant leap" for the cause of women, but then she did something that presidential candidates rarely do: She conceded that losing the nomination is a possibility but could still be beneficial.

"I can make a showing and help advance the cause of women in higher office, pave the way for a woman president," Braun said.

Kucinich, perhaps the field's most liberal member, criticized Mr. Bush for going to war against Iraq and mocked the administration for failing to find weapons of mass destruction, which had been the justification for combat with Saddam Hussein's regime.

Picking up on a line of attack evident this past weekend in Iowa, the Democrats took issue with Bush's effort to thwart terrorism.

"We are paying for what we did in Iraq because when you see al Qaeda come back that is the price we pay for taking our eye off the ball," Dean said.

"I can't wait to remind this country that landing on an aircraft carrier ... doesn't make up for the lack of an economic plan or a security plan," the lawmaker said.