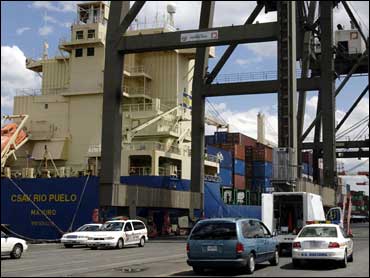 Democratic senators assailed an Arab company's takeover of operations at six major American ports and said Monday that President Bush should stop the deal to better protect the U.S. from terrorists.

"We wouldn't turn over our customs service or our border patrol to a foreign government," New Jersey Sen. Robert Menendez said during a news conference. "We shouldn't turn over the ports of the United States, either."

Lawmakers say they are worried there are insufficient safeguards to thwart infiltration of the vital facilities by terrorists.

"It's unbelievably tone deaf politically at this point in our history," Sen. Lindsay Graham, R-S.C., said on "Fox News Sunday." "Most Americans are scratching their heads, wondering why this company from this region now."

During a stop Monday in Birmingham, Ala., Attorney General Alberto Gonzales defended the deal and said the administration had a "very extensive process" for reviewing such transactions.

But CBS News correspondent Randall Pinkston reports critics point to the United Arab Emirates track record — it was the transfer point for nuclear components to Iran, North Korea and Libya, and the UAE's history as an operational and financial base for the hijackers who carried out the attacks of Sept. 11, 2001.

"God, if you have a country that is not doing internally what it should be to prevent the transfer of nuclear parts, we're going to give that country operation of the major ports of this nation?" New Jersey's Menendez asked. "I think not."

"It needs to be stopped by the president, first and foremost. Either freeze the deal or negate the deal," he added.

During a campaign stop in Bladensburg, Md., Monday, Baltimore Mayor Martin O'Malley was adamant that the operations of his city's port not be turned over to a foreign country.

"I believe that President's Bush's decision to turn over the operations of any American port is reckless. It is outrageous and it is irresponsible," said O'Malley, who is seeking the Democratic nomination for governor of Maryland.

O'Malley was also quick to attack Homeland Security Secretary Michael Chertoff, who spent most of Sunday on television defending the deal.

"With all due respect to Mr. Chertoff," O'Malley said. "He was also the Homeland Security secretary who went to sleep after he was informed the levees had broken in New Orleans."