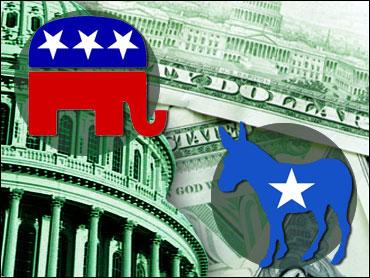 The Democrats' congressional campaign committees raised $15.5 million during the first 18 days of October, setting up their final push to reclaim both chambers. Republicans, meanwhile, raised $10.1 million for their candidates, continuing a pace that has lagged this election.

"In the world series of fundraising, Senate Democrats just hit a grand slam in the bottom of the ninth," Sen. Chuck Schumer, D-N.Y., the committee's chairman, said in a statement. "The rapid rate at which Democrats are raising money is the latest evidence that Americans want change in the Senate."

The Senate fundraising disparity does not reflect individual campaign fundraising, which Republicans said gave them a $14 million advantage during the last complete reporting period.

The NRSC has $8.9 million on hand. It has raised $78.8 million this cycle. Its spokesman, Brian Nick, noted that Democrats outraised Republicans in 2004 and still didn't unseat the majority GOP.

The DSCC has $9.7 million in the bank. So far, the committee has raised $104 million for candidates. Those numbers don't reflect a pair of $250,000 donations from Sens. Edward M. Kennedy and John Kerry. It does, however, include the more than $2 million this cycle from Sen. Hillary Rodham Clinton.

"Those are millions of dollars flowing into the committee in the last couple of weeks and those are padding the numbers big time," Nick said.

Both parties' committees submitted reports to the Federal Election Commission on Thursday, 12 days before the midterm elections.

For House candidates, Democrats raised $6.4 million during the first days of October, giving them $17 million in the bank. The Democratic Congressional Campaign Committee has raised $105 million this cycle.

Republicans trying to stop the Democrats from winning 15 seats and the majority in the House raised $6.5 million, bringing its cash-on-hand total to $18.3 million and election-cycle total to $142.4 million.

Combined, the Democrats have $26.7 million to spend on candidates in the final weeks. Republicans have $27.2 million in hand.