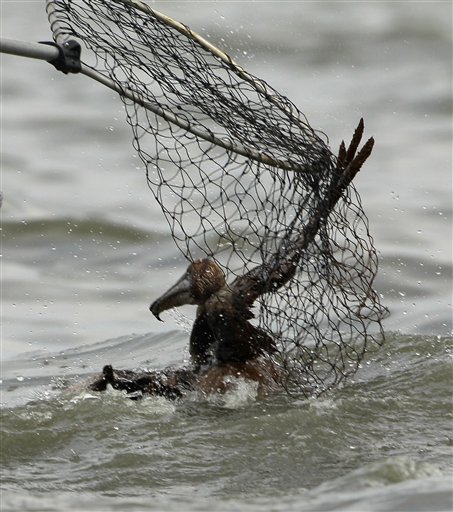 House Republican Leader John Boehner came under some scrutiny yesterday over whether he wants BP to pay for all the damage the oil spill in the Gulf of Mexico is causing. Boehner's office clarified that he does indeed want the oil company to be on the hook for the disaster - as opposed to taxpayers -- but Democrats are holding his feet to the fire on the issue as they move forward with legislation that would force BP to cover costs.

Currently under the law, BP is responsible for all of the clean up costs related to the spill that started when the Deepwater Horizon oil rig exploded on April 20. In addition, the law requires BP to pay for $75 million in other damages -- such as the spill's economic or environmental impacts. Those costs are expected to far exceed that $75 million, however.

Democratic legislators in both the House and the Senate last month introduced legislation to raise the liability cap from $75 million to $10 billion and enact the rules retroactively to compel BP to pay for the damages related to this spill. Now, Democrats are saying they want to go even further and lift the liability cap completely.

"Why should there be a cap?" House Speaker Nancy Pelosi (D-Calif.) said today, CBS News Capitol Hill Producer Jill Jackson reports. "BP is going to pay the bill. It's going to pay the bill for the cleanup... there will be no taxpayer dollars that will not be repaid by British Petroleum... I'm for no cap."

Meanwhile, Democrats are criticizing Boehner for supposedly suggesting that BP shouldn't have to pay for all of the damages. Boehner was asked at a press conference yesterday whether he agrees with the Chamber of Commerce, which takes the position that the liability cap should not be lifted retroactively to make BP pay for damages.

"I think the people responsible in the oil spill -- BP and the federal government -- should take full responsibility for what's happening there," Boehner said.

Boehner's office clarified to the Washington Post that he wants BP to pay for everything.

"No taxpayer money for cleanup or damages -- period," a spokesperson told the Post. "BP pays. If the current law doesn't guarantee that, we are happy to work in a bipartisan way on reasonable new legislation."

That isn't stopping Democrats from blasting the Republican leader for his comments. The Democratic Congressional Campaign Committee today launched the site BoehnerBPBailout.com. The site highlights the money "big oil" has contributed to Republicans, including more than $258,000 just to Boehner.

"Republican Leader John Boehner has sided with the U.S. Chamber of Commerce in declaring that U.S. taxpayers should be hit with the bill to help clean up Big Oil giant BP's spill in the Gulf of Mexico," a message on the site reads.

While Boehner's office maintains he wants BP to pay for all costs associated with the spill, Republicans so far have not supported the Democrats' legislation to lift the liability cap. In the Senate, the GOP has blocked attempts to move the bill forward.

Meanwhile, Democrats are also critically pointing to remarks (shown in the video at left) Boehner made criticizing the the numerous congressional hearings Democrats are holding on the subject of the oil spill.

"Well, this is Congress at its best," Boehner said sarcastically to the press yesterday. "Why don't we get the oil stopped, all right? Figure out what the hell went wrong and then have the hearing and get the damn law fixed."

Pelosi said today that in addition to legislation that would raise the liability cap, lawmakers are also considering a bill to split up the Minerals Management Service (the Interior Department division that oversees drilling), a bill to change the Death on High Seas Act so that widows and children of the oil rig workers who died are entitled to more compensation, and a bill to make BP pay the government for lost royalties. They're also writing a bill designed to ensure there is technology in place to respond to such accidents in the future.

The speaker has given lawmakers a July 4 deadline to introduce legislation to respond to the crisis in the Gulf and prevent future disasters, Jackson reports.