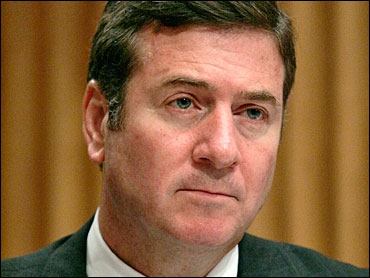 The Democratic National Committee today unveiled a website meant to serve as a central video repository that organizers hope will expose a series of "macaca moments" that bring down Republican candidates.

"Macaca," you'll recall, was the slur Sen. George Allen (pictured) uttered in 2006 to an Indian-American employee of Allen's opponent who was filming him; the resulting uproar contributed to the GOP candidate's eventual loss to Democratic Sen. Jim Webb in the general election (and scotched talk of an Allen presidential bid in 2008).

"For too long, our politics has been poisoned with misinformation, lies and double-speak. The most powerful way to combat these tactics is to drag them into the light of public scrutiny," the site says. "The Accountability Project is a volunteer platform to document Republican candidates and their public statements at local events, as well as their campaign tactics. The Accountability Project allows you to submit videos, recordings, and other items for publication online, so that candidates see that there's a cost to their dishonesty."

In addition to video, the site encourages participants to pass along word of upcoming events - so that people know where to go to record them - as well as submit copies of candidate mailers, emails, and attack ads.

DNC Research Director Shauna Daly, who is behind the site (which is labeled "grassroots," despite its origins), is sending an email to supporters today explaining the reason for its creation. (TPMDC has posted it here.)

After invoking Allen's defeat after the "macaca" comment, Daly writes that the incident resulted from "just one moment."

Added Daly: "Who knows what else is being said when the cameras aren't running?"

A DNC official told Politico that the videos will be screened for inappropriate content and authenticity and said that "Unlike YouTube where you can only upload video, ... users [of the site] can download high quality videos from the site for clipping and using for their own projects (web videos, ads, etc)."