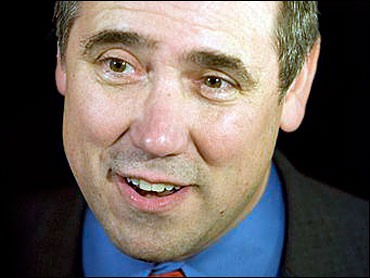 With 75 percent of precincts reporting, Merkley had a 49 percent to 46 percent advantage, or about 40,000 votes. Previous returns had shown Smith slightly ahead, but that was before votes were counted in the state's most populous county, a liberal stronghold. (Click here for complete Oregon results)

It was one of the last Senate races to be decided. Oregon does its ballots by mail, but a flood of votes Oregonians delivered on Election Day kept election workers tallying ballots for two days.

Merkley is the speaker of the House in Oregon. Smith was a two-term incumbent and the lone Senate Republican on the Pacific Coast.

The victory means Democrats have picked up six seats in the new Senate, for a total of 57 overall when independent Sens. Joe Lieberman and Bernie Sanders are included. On Tuesday, Democrats also picked up at least 17 seats in the House.

However, there are three more races involving Republican incumbents yet to be decided in Alaska, Minnesota and Georgia. More on those races below:

A slugfest for nearly two years, Minnesota's Senate race headed into a new round as the campaigns girded for an automatic statewide recount to determine whether Republican Sen. Norm Coleman's bare lead over Democratic challenger Al Franken would stand. (Click here for complete Minnesota coverage)

Coleman declared himself the winner of Tuesday's election, but Franken said he would let the recount play out, hoping it would erase the incumbent's 438-vote lead out of nearly 2.9 million ballots. State officials said the recount wouldn't start until mid-November and would probably take weeks.

"Yesterday the voters spoke. We prevailed," Coleman said Wednesday at a news conference. He noted Franken could opt to waive the recount.

"It's up to him whether such a step is worth the tax dollars it will take to conduct," Coleman said, telling reporters he would "step back" if he were in Franken's position. Secretary of State Mark Ritchie said the recount would cost 3 cents per ballot, or almost $90,000.

Dean Barkley of the Independence Party was third with 15 percent.

State law provides for automatic recounts in races decided by a half-percentage point or less.

"We won't know for a little while who won the race, but at the end of the day we will know the voice of the electorate is clearly heard," Franken said Wednesday. "This has been a long campaign, but it is going to be a little longer before we have a winner."

If Sen. Ted Stevens prevails in his tight re-election bid, he might be able to thank his reputation for bringing home the bacon. (Click here for complete Alaska coverage)

Stevens had appeared to be trailing before Tuesday, but with nearly all precincts reporting, he held a razor-thin lead Wednesday over Democrat Mark Begich, a popular two-term Anchorage mayor.

With 99 percent of precincts reporting Wednesday, Stevens led with 48 percent of the vote, compared with 47 percent for Begich - with less than 3,500 votes separating the two.

Stevens' political future hangs in the balance with the counting of roughly 60,000 absentee ballots, as well as 9,000 early votes and questioned ballots. Those votes won't be counted for days.

Stevens was convicted last week of seven felonies for failing to disclose more than $250,000 in gifts and services from Bill Allen, a former friend and oil services company executive.

He would be the first convicted felon re-elected to the U.S. Senate. But his colleagues also could expel him, putting an end to the longest run by a Republican in the history of the Senate.

The last seat of the new Senate will likely be determined by a runoff in Georgia, where Republican Sen. Saxby Chambliss apparently came just short of winning enough votes to send him to a second term. (Click here for complete Georgia coverage)

With 99 percent of precincts reporting Wednesday, Chambliss had 49.8 percent of the vote, shy of the 50 percent plus one required under state law to avoid a runoff. The mild-mannered Democrat Jim Martin, a former Georgia legislator and once-reluctant Senate candidate, won 46.8 percent of the vote. Libertarian Allen Buckley pulled 3.4 percent.

Some absentee votes were still being counted late Wednesday. However, if the current results hold, Chambliss would face Martin on Dec. 2.

"We're prepared for a runoff. We have already hit the ground," said Chambliss, who was expected to coast to re-election in reliably GOP Georgia before the nation's economy faltered, fueling a wave of anti-incumbent frustration. Some conservatives were angered that Chambliss backed the $700 billion bailout.

Martin said he had already been in touch with Barack Obama's campaign, but there were no immediate plans for the president-elect to visit Georgia. "The runoff race begins right now," Martin said.

Click here to see the results of all Senate races on Tuesday.