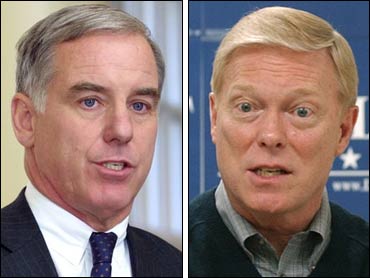 With less than a month to go before the crucial Iowa caucuses and New Hampshire primaries, Democratic candidates turned to domestic issues Monday.

Former Vermont Gov. Howard Dean laid out a plan to save America's cities, when Rep. Richard Gephardt of Missouri focused on special education and disabled workers.

Dean said he wants to improve the nation's cities by putting $100 billion toward creating a million jobs, increasing the federal minimum wage to $7 an hour, and providing credit for urban businesses.
The former Vermont governor planned to unveil his Initiative to Strengthen the Nation's Cities during a Monday afternoon campaign stop in downtown Detroit. In an advance copy of the plan obtained by The Associated Press, Dean said he would help put people back to work by creating a $100 billion Fund to Restore America aimed at adding at least a million jobs in the first two years it's in place.

Cities and regions would use these funds to create jobs in education, health care, homeland security and other critical areas. The fund also would support local programs that help create, promote and retain good jobs and train workers in disadvantaged communities.

His plan would set up a national fund to provide a permanent source of funding to build, rehabilitate and preserve affordable housing for low- and moderate-income families, and double the amount for the Community Development Block Grant program to $10 billion.

"Families in America's metro areas face a high cost of living," Dean says in a news release. "If they're working hard and playing by the rules, they shouldn't have to struggle so hard to make ends meet. That's why my initiative is aimed at creating jobs, promoting investment in small business, boosting wages and helping families afford housing.

"We cannot afford to waste four more years under an administration that ignores the potential as well as the problems of our cities," he said.

Gephardt is calling for new spending on special education, easing rules allowing people with disabilities to get jobs and using federal contracts to favor businesses that hire such workers.

Gephardt argued that federal rules build obstacles for people with disabilities seeking work because they can lose medical coverage and other benefits if they take jobs.

"At a minimum, the federal government should not make it harder for people with disabilities to accept a job," Gephardt said in remarks prepared for delivery. "Instead, we must provide incentives to further ease the path to work."

In addition, Gephardt said he would push to fully fund programs offering special education to youngsters with disabilities, a key to developing the skills needed to work independently.

"Children with disabilities must get a first-rate education if they are going to succeed in the workplace," he said. "Lack of skills can be the largest obstacle to success in our economy."

Clark's new television commercial includes a clip of him and former President Bill Clinton. It's the first ad of the 2004 campaign to include an image of the former president, arguably America's most popular Democrat.

The clip is only a few seconds and shows Mr. Clinton walking from a lectern at the White House to place the Presidential Medal of Freedom over Clark's head, honoring his fellow Arkansan for his work in Kosovo as NATO supreme allied commander.

It is one of several scenes in the 30-second ad that was to start running Monday night in New Hampshire, where Clark is trailing Howard Dean and John Kerry in polls. The commercial includes footage of Clark with a short-order cook, a soldier and schoolchildren in a classroom.

Campaign advisers say the ad is meant to illustrate that Clark would be the kind of leader who not only has seen ordinary people do extraordinary things in their lifetimes, but who has been honored for such accomplishments.

As the Clinton clip is shown, an announcer in the ad says that Clark is a leader who has been "decorated for valor and for service in our country."

Mr. Clinton's name is not mentioned, but it's obvious that the footage is meant to align the retired Army general with the former president. It is one more example of how Clark's campaign is embracing the similarities between the two men.