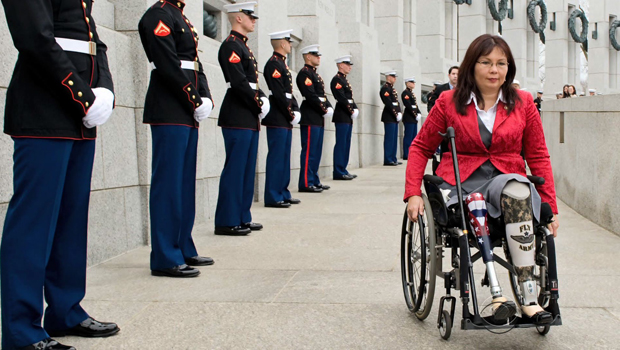 House Democrats decided Thursday to deny Rep. Tammy Duckworth, D-Illinois, a proxy vote in the Democratic leadership elections, which she requested because she can't be in Washington, D.C. for the vote. First reported by the National Journal, the very pregnant 46-year-old Iraq War veteran who lost both of her legs in a 2004 helicopter crash, was told by doctor that it was unsafe for her to fly at this stage in her pregnancy.

Minority Leader Nancy Pelosi, D-California, opposed the request, a day after she chastised reporters over what she suggested was a gender-based double standard: "You never ask Mitch McConnell, 'Aren't you getting a little old Mitch? Shouldn't you step aside?'"

And Rep. Rosa DeLauro, D-Connecticut, who has been a fierce advocate for issues that resonate with women, is one of the members who denied the request because, as she told CBS News producer Alicia Amling, she didn't want to set a precedent. DeLauro said that while the request had merit, there had been many cases with merit that had come up in the past and were denied.

The motion to allow Duckworth a proxy vote was made by Rep. Jan Schakowsky, D-Illinois. Then, according to a Democratic aide, Rep. Gwen Moore, D-Wisconsin, also requested a proxy vote because she will be attending a funeral on Tuesday. Most of the members in the room then seemed inclined to deny the original motion on the grounds that it seemed to be creating something of a slippery slope. Schakowsky seemed to recognize this and withdrew her motion. The other issue for the lawmakers was that they had no practical way of casting a secret ballot remotely.

Duckworth said in a statement, "The Caucus chose not to allow me to vote via proxy. I respect the process and very much appreciated my colleagues who made sure my request was considered."

The unspoken issue is the selection of the ranking member of the powerful Energy and Commerce Committee, just vacated by retiring Rep. Henry Waxman, D-California. Minority leader Nancy Pelosi is backing Rep. Anna Eshoo, D-California, over Rep. Frank Pallone, D-New Jersey, who has seniority. The vote has been cast as a kind of for-Pelosi v against-Pelosi battle. Pallone is supported by Whip Steny Hoyer, D-Maryland.

A senior Democratic aide told Amling, "It's disgusting that Schakowsky and pro-Pallone folks are attempting to politicize an internal Caucus decision." The aide accused Pallone supporters of orchestrating the motion "intentionally, to create a stir.

Ranking member positions in the House caucus are usually determined by the Steering Committee, but when there are closely contested races, they are often decided by the entire Caucus, as is the case here. Historically, members have not been allowed to vote by proxy in leadership elections.