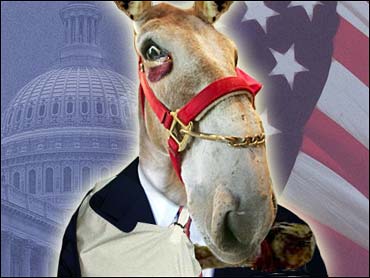 We are in unsure times amid a controversial war. Yet the American people are not swayed by the universities, the major networks, the New York Times, Hollywood, the major foundations, and NPR. All these bastions of doctrinaire liberal thinking have done their best to convince America that George W. Bush, captive to right-wing nuts and Christian fanatics, is leading the country into an abyss. In fact, a close look at a map of red/blue counties nationwide suggests that the Democrats are in deepening trouble.

Why? In a word, Democratic ideology and rhetoric have not evolved from the 1960s, although the vast majority of Americans has -- and an astute Republican leadership knows it.

CLASS
The old class warfare was effective for two reasons: Americans did not have unemployment insurance, disability protection, minimum wages, social security, or health coverage. Much less were they awash in cheap material goods from China that offer the less well off the semblance of consumer parity with those far wealthier. Second, the advocates of such rights looked authentic, like they came off the docks, the union hall, the farm, or the shop, primed to battle those in pin-stripes and coiffed hair.

Today entitlement is far more complicated. Poverty is not so much absolute as relative: "I have a nice Kia, but he has a Mercedes," or "I have a student loan to go to Stanislaus State, but her parents sent her to Yale." Unfortunately for the Democrats, Kias and going to Stanislaus State aren't too bad, especially compared to the alternatives in the 1950s.

A Ted Kennedy, John Kerry, John Edwards, Howard Dean, George Soros, or Al Gore looks -- no, acts -- like he either came out of a hairstylist's salon or got off a Gulfstream. Those who show up at a Moveon.org rally and belong to ANSWER don't seem to have spent much time in Bakersfield or Logan, but lots in Seattle and Westwood. When most Americans have the semblance of wealth -- televisions, cell phones, cars, laptops, and iPods as well as benefits on the job -- it is hard to keep saying that "children are starving." Obesity not emaciation is the great plague of the poorer.

So the Democrats need a little more humility, a notion that the country is not so much an us/them dichotomy, but rather all of us together under siege to maintain our privileges in a tough global world -- and at least one spokesman who either didn't go to prep school or isn't a lawyer.

RACE
The Democrats, at least in the north, were right on the great civil-rights debate of 1960s. Yet ever since, they have lost credibility as they turned to the harder task of trying to legislate an equality of result -- something that transcends government prejudice and guarantying a fair playing field, and hinges on contemporary culture, behavior, values, and disciple.

The country is also no longer white and black, but brown, yellow, black, white, and mixed. When a liberal UC Berkeley chancellor remonstrates about "diversity" and "multiculturalism," lamenting that his merit-based entrance requirements have sadly resulted in too few "Hispanics" and "African-Americans" (he ignores that whites at Berkeley also enroll in numbers less than their percentages in the state population), what he really means -- but won't say -- is that there are apparently too many Asians, about 45 percent enrolled in Berkeley versus about 12 percent in the state population.

What will he do? Praise a hard-working minority that overcame historic prejudice against them? Hardly. We suspect instead the typical liberal solution is on the horizon: some clever, but secretive administrative fix that contravenes Proposition 209, and then denies that compensatory action is aimed against the Asians it is aimed at.

In short, race-based thinking beyond protection of equal opportunity is fraught with public suspicion, especially when so many loud spokesmen for minorities -- Jesse Jackson or Kweisi Mfume -- either are elites themselves or do not practice the morality they preach. An Alberto Gonzales or Condoleezza Rice comes across as proud, competent, and an expert rather than a tribalist, while those in the Black Caucus or La Raza industry appear often the opposite. Would you want a sober Colin Powell or an often unhinged Harry Belafonte and surly Julian Bond in your party? Did Condoleezza Rice, answering acerbic senators without notes, or Barbara Boxer, droning off a prepared script, appear the more impressive in recent confirmation hearings? A Democratic "minority" appointment to a cabinet post at education or housing is one thing; a Republican belief that the best candidates for secretary of state, national security advisor, and attorney general are incidentally minorities is quite another.

AGE
The Democrats won on the Social Security issue years ago. Annual cost-of-living increases and vast expansions to the program helped to ensure that we no longer witness -- as I did in rural California in the early 1960s -- elderly with outhouses and without teeth and proper glasses. In fact, despite the rhetoric of Washington lobbying groups, those over 65 are now the most affluent and secure in our society, and are on the verge of appearing grasping rather than indigent. They bought homes before the great leap in prices; they went to college when it was cheap; and they often have generous pensions in addition to fat social security checks. So ossified rhetoric about the "aged" in the social security debate -- increasingly now not so much the Greatest Generation of WWII and the Depression as the first cohort of the self-absorbed baby boomers -- is self-defeating.

George Bush is appealing to a new group that really is threatened -- the under-35's who cannot afford a house, have student loans, high car and health insurance, and are concerned that their poor therapeutic education will leave them impoverished as China and the rest of Asia race ahead.

DEFENSE
The problem with Democrats is that Americans are not convinced that they will ever act in any consistent manner. We can argue about Afghanistan, but if one were to go back and read accounts in October 2001 about hitting back, the news reflected liberals' doubt about both the wisdom and efficacy of taking out the Taliban.

Would Al Gore have invaded Afghanistan less than a month after 9/11? If John Kerry were President and China invaded Taiwan, what would he do?

What would an administration advised by Madeline Albright, Barbara Boxer, Joe Biden, Jamie Rubin, Nancy Pelosi, or Jimmy Carter do if Iran sent a nuke into Israel, or North Korea fired a series of missiles over the top of Japan?

Or, if al Qaeda, operating from a sanctuary in Iran or Syria, took out the Sears Tower, how would a Kennedy, Kerry, or Gore respond? Six cruise missiles? A police matter? Proper work for the DA? Better "intelligence"? Let's work with our allies? Get the U.N. involved?

Whatever we think of George Bush, we know he would do something real -- and just what that something might be frightens into hesitation -- and yes, fear-- many of those who would otherwise like to try something pretty awful.

WILL THEY EVER LEARN?
Until Democrats promote someone who barks out something like, "We can and will win in Iraq," or, "Let the word go out: An attack on the United States originating from a rogue state is synonymous with its own destruction," or some such unguarded and perhaps slightly over-the-top statement, I don't think that the American people will entrust their safety to the party. John Kerry, to be frank, is no Harry Truman, and time is running out for Hillary Clinton to morph into Scoop Jackson.

Philosophically, two grand themes explain the Democratic dilemma. One, the United States does not suffer from the sort of oppression, poverty, or Vietnam nightmares of the 1950s and 1960s that created the present Democratic ideology. Thus calcified solutions of big government entitlements, race-based largess, and knee-jerk suspicion of U.S. power abroad come off as either impractical or hysterical.

Second, there is the widening gulf between word and deed -- and Americans hate hypocrites most of all. When you meet a guy from the Chamber of Commerce or insurance association, you pretty much know that what you see is what you get: comfort with American culture and values, an upscale lifestyle that reflects his ideology and work, and no apologies for success or excuses for lack of same.

But if you listen to Dr. Dean and his class venom, it hardly seems comparable with how he lives or how he was brought up. John Kerry's super power boat, Teresa Kerry's numerous mansions, Arianna Huffington's gated estate, George Soros's jet, Ted Turner's ranches, Sean Penn's digs -- all this and more, whether fairly or unfairly, suggest hypocrisy and insincerity: Something like, "High taxes, government regulation, racial quotas, and more entitlements won't hurt me since I have so much money at my own disposal anyway, but will at least make me feel good that we are transferring capital to the less fortunate."

Worse yet, such easy largess and the cost of caring often translate into contempt for the small businessman, entrepreneur, and salesperson who is supposedly illiberal because he worries that he has less disposable income and is less secure. And when you add in cracks about Wal-Mart, McDonald's, and the "Christian Right" -- all the things the more cultured avoid -- then the architects of a supposedly populist party seem to be ignorant of their own constituencies.

When will Democrats return to power? Three of the most influential legislators in the Democrat party-- Diane Feinstein, Barbara Boxer, and Nancy Pelosi -- reside in and came out of the San Francisco Bay area, which for all its undeniable beauty has created a culture still at odds with most of America. John and Teresa Kerry would have been the nation's first billionaire presidential couple. The head of the Democratic party is a New England condescending liberal, with a vicious tongue, who ran and lost on a platform far to the left of an unsuccessful liberal.

In contrast the only two men elected president from the Democratic party in 30 years were southerners, hammed up their rural and common-man roots -- the son of a single mother in Arkansas and a peanut farmer in Plains, Georgia -- and were narrowly elected largely due to national scandals like Watergate or third-party conservative populists like Ross Perot. The aristocratic media -- CSB News, the New York Times, NPR -- is often liberal and yet talks of its degrees and pedigree; the firebrand populist bloggers, cable news pros, and talk-radio pundits are mostly conservative and survive on proven merit rather than image.

When we see Democrats speaking and living like normal folks -- expressing worry that the United States must return to basic education and values to ensure its shaky preeminence in a cutthroat world, talking of one multiracial society united by a rare exceptional culture of the West rather than a salad bowl of competing races and tribes, and apprising the world that we are principled abroad in our support of democratic nations and quite dangerous when attacked -- they will be competitive again.

Since they will not do that, they will keep losing -- no matter how much the economy worries, the war frightens, and the elite media scares the American people.

Victor Davis Hanson is a military historian and a senior fellow at the Hoover Institution at Stanford University. His website is victorhanson.com.