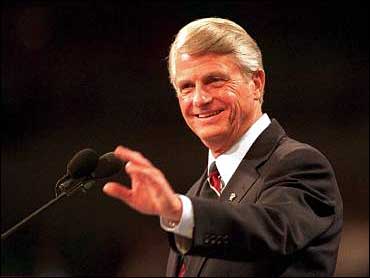 Mr. Bush traveled to Georgia not only to tout his stimulus plan but to single out Sen. Zell Miller, the only Senate Democrat who has come out in support of his economic proposals.

"I agree with Zell, with this economic theory that when a person has more money in his pocket, they're likely to demand that somebody produce them a good or a service," he said. Miller, who accompanied the president to the stage stood alongside, applauding Mr. Bush's remarks.

"The cornerstone of good economic policy recognizes the money in Washington, D.C. is not the government's money, it's the people's money," Mr. Bush said, "and the more of it you have in your pocket, the more likely somebody's going to have a job."

In introducing the president, Miller did not specifically back the Bush tax cuts, although he called Mr. Bush a man "of common sense" and said one should "not take money from the hard-earned taxpayer in the first place."

Miller, however, has decided to the Democratic sponsor of a measure containing the president's proposals, his aides and Mr. Bush said.

The Georgia Democrat, who once said "I never met a tax cut I didn't like," announced last month that he won't run for re-election in 2004.

The president called on Congress to pass his tax cuts and warned lawmakers that without them the economic recovery might not happen.

"I'm going to remind Congress that without the stimulus, without tax reductions, we could jeopardize the recovery that we long for," Mr. Bush said.

Despite objections from hundreds of leading economists, the president said his tax cut plan "makes sense," and pointed to a new "blue chip" economic forecast that sees 3.3 percent economic growth this year, but only if the Bush plan is enacted.

"It makes sense when analyzed by the economists behind the Blue Chip forecasts," he said.

By contrast, more than 400 economists, including 10 Nobel laureates, said last week that Mr. Bush's tax plan wouldn't help the ailing economy immediately. Instead, they predicted that it would create deeper deficits that could drive up long-term interests rates and jeopardize the economy down the road.

Three government reports Thursday cast doubt on the state of the recovery.

The number of newly laid off workers filing unemployment claims jumped to a seven-week high of 402,000 last week; the United States recorded the largest trade deficit in history, $435.2 billion, and inflation shot up by 1.6 percent in January, the biggest increase in 13 years.

And the private Index of Leading Indicators was flat in January, pausing after three straight months of gains, an industry group reported Thursday.

The Democrats who want Mr. Bush's job have attacked the Bush plan, the latest blast coming from Rep. Dick Gephardt, who announced his candidacy for president Wednesday.

Gephardt and other Democrats, and even some Republicans say the nation cannot afford new tax cuts at a time when it has returned to budget deficits.

Fueling that debate, Mr. Bush was reluctantly signing a budget measure Thursday authorizing $397.4 billion financing every agency except the Pentagon for the 2003 budget year that began Oct. 1. The package contains billions of dollars Bush had not initially sought for farm aid, highway construction, doctors and hospitals.

The president tried to skirt a growing political controversy in Georgia over a proposal by Republican Gov. Sonny Perdue to ask voters whether to bring back the old state flag with its big Confederate emblem.

Mr. Bush tried to stay out of a similar controversy during his own campaign in 2000, saying the matter was a state issue. It is a delicate political issue for the president, who needs to maintain his strong support in the South to win re-election. Many rural whites oppose getting rid of the Confederate emblem.

Mr. Bush's spokesman strove Thursday to shield the president from the new debate. "As a matter of principle, the president believes it's an issue for the people of Georgia to decide," Ari Fleischer said.