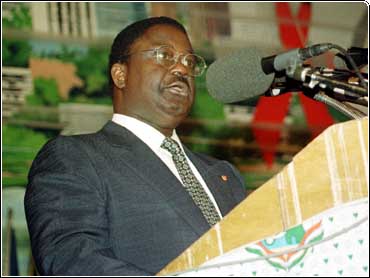 After toppling an elected government in a largely bloodless coup, Ivory Coast's first junta leader offered Monday to work with civilian politicians until democracy is restored.

Casting himself as a moderate, Gen. Robert Guei said he is not planning a political crackdown and invited parties to submit candidates for a new Cabinet he said could be named next week.

"I don't find it useful to dissolve political parties," Guei said in a meeting with representatives of 48 parties, including the former ruling Democratic Party of the Ivory Coast. "But on the other hand, let me say that we are counting on you to avoid troubles."

Guei said military officials would be appointed to key ministries such as defense, security and foreign affairs, but civilians would be named to other posts. The junta also plans to draft a new constitution for the country, state-run radio reported Monday.

Despite three days of frenzied looting, many Ivorians welcomed last week's coup, saying they hoped the army would improve Ivory Coast's shaky economic and political circumstances. President Henri Konan Bedie, who was elected four years ago, was widely accused of corruption and stirring up ethnic divisions.

Although political parties were cautious about drawing early conclusions about the junta, many welcomed Bedie's ouster.

France, the United States and several African countries, however, condemned the coup and called for a return to civilian rule. Canada suspended all direct aid to Ivory Coast.

Ivory Coast, a nation of 19 million people, has long been considered a model of stability in volatile West Africa. But political and social tensions have increased in recent months ahead of presidential elections scheduled for October.

The military takeover was the country's first since it became independent from France in 1960.

The putsch began Thursday, with troops racing through Abidjan in seized luxury cars and shooting into the air to protest unpaid salaries, poor living conditions and what they called the bad governance of the country. On Friday, Guei declared the military in control, and suspended the constitution, courts and parliament.

Guei has acknowledged a number of people were injured in the gunfire, and there were unconfirmed reports Monday of deaths.

At least four people were killed in a car accident when the driver tried to escape rioting in the Koumassi suburb on Friday, witnesses said. And a number of inmates died in a stampede when soldiers released prisoners the same day from Abidjan's main jail, a military officer.

Despite the junta leader's offer to cooperate with politicians, many of Bedie's Cabinet members were in custody Moday and all were ordered to turn in their official cars to military authorities.

Bedie had sought refuge at a French military base near Abidjan's international airport until Sunday, when he left for the Togolese capital, Lome, with about 10 family members.

The ousted leader promised not to oppose the junta with violence and said he planned to spend his "forced asylum" visiting African and other world leaders to rally diplomatic support for his elected government.

"We are not going to pour oil on a very inflammable situation," he told journalists on a visit to Abuja, Nigeria. "Our only hope is that reason will prevail."

In a sign the junta felt in control Monday, Guei lifted a dusk-to-dawn curfew that had been in effect for three days during which soldiers were ordered to shoot violators on sight.