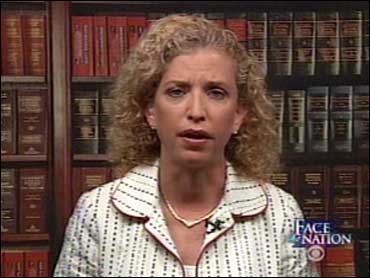 Democratic Rep. Debbie Wasserman Schultz of Florida (shown at left) traveled with a congressional delegation to Haiti earlier this week. She didn't like what she saw -- or rather, what she didn't see.

"We were actually pretty struck by the fact that we didn't see the Red Cross anywhere, at all," Wasserman Schultz told Florida radio station WTFL, the Hill reports.

The lack of a visible presence of the Red Cross even prompted the congresswoman to question whether she could recommend that citizens donate to the group. "I wouldn't say that," she said when asked if the Red Cross was the best place for listeners to donate.

Wasserman Schultz's comments may come as a surprise to Americans who have donated generously to the Red Cross Haiti relief efforts after a massive earthquake hit the country in January. The organization has collected more than $409 million in donations, including more than $32 million from a text message donation campaign facilitated by the State Department and promoted by the White House.

Not to worry, the Red Cross has responded.

"The American Red Cross has been on the ground responding in Haiti since the moment the earthquake struck and has spent a record $110 million so far for food, water, shelter, health and family services," the American Red Cross said in a statement. "Our efforts have touched the lives of close to two million people."

Those efforts just may not be so visible on the ground, a Red Cross spokesperson told Hotsheet, because the Red Cross relies largely on local Red Cross workers and volunteers. They may not be as conspicuous, but they know the people, the language and the geography, and they have established relationships with other organizations and the government.

The American Red Cross says it has sent more than 165 trained disaster specialists and volunteers to Haiti to help support and train more than 10,000 Haitian Red Cross volunteers. Furthermore, it reports that the Red Cross network has provided relief items to 400,000 people, supplied meals to more than one million people, distributed 60 million liters of clean drinking water, built more than 1,300 latrines and helped vaccinate more than 152,00 people.

The organization has a three-to-five year recovery plan for Haiti.