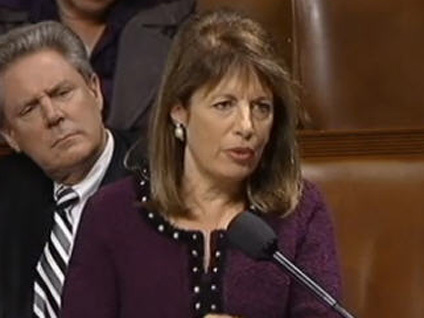 House debate over Republican proposals to cut millions of dollars in funding for family planning programs became emotional on Thursday night, when one Democratic congresswoman spoke about her own experience with abortion.

The proposal in question, put forth by Rep. Mike Pence (R-Ind.), would cut all federal funding for Planned Parenthood. It would also entirely eliminate a program known as Title X, which provides more than $300 million in aid for family planning and reproductive health, much of which is directed toward low-income families.

During the course of the three-hour debate, which lasted late into the night, more than 30 House members voiced their thoughts on the issue - but the chamber floor fell silent when Rep. Jackie Speier (D-Calif.) spoke about her own experience with abortion.

Noting that she had originally intended to address a different topic, Speier said she was driven to share her own perspective after hearing the remarks of Rep. Chris Smith (R-N.J.), who for five minutes read graphic passages of a book in which a woman describes the experience of having an abortion.

"I really planned to speak about something else but the gentleman from New Jersey just put my stomach in knots because I'm one of those women he spoke about just now," Speier said. "I had a procedure at 17 weeks pregnant with a child who moved from the vagina into the cervix. And that procedure that you just described is a procedure that I endured."

"I lost the baby," she continued. "And for you to stand on this floor and suggest that somehow this is a procedure that is either welcomed or done cavalierly or done without any thought, is preposterous."

Speier went on to call the proposal a "vendetta" against Planned Parenthood.

Pence, a fervent opponent of abortion rights who was at one time thought to be a potential 2012 presidential contender (he recently announced his decision not to run), referenced during his remarks a video depicting a Planned Parenthood employee giving advice to a couple posing as a pimp and a prostitute. (The video was produced by an anti-abortion group as a part of an undercover sting operation.)

"As the father of two teenage daughters, there are not words strong enough to portray my contempt of this pattern of apparent fraud and abuse by Planned Parenthood," Pence said.

Abortion rights advocates have called the proposal a "war against women" and argue that federal law already prohibits the expenditure of funds toward providing abortions. According to the New York Times, Planned Parenthood currently receives more than $75 million a year from the federal government to provide family planning and sex education services largely to low-income women.

Congress, however, has long since banned the use of federal funds for abortions.

"By targeting Planned Parenthood, the Pence Amendment will risk the lives and safety of millions of American women," said New York Democrat Louise Slaughter. "These proposed cuts to family planning represent the opening salvo in an all-out war on women's health - and I have been a soldier on the other side of that war for several decades."

She added that "It has been an absolute awful time for most of us who are such strong believers in the rights of women and women's health, and that women should have the ability to make decisions themselves."

Cecile Richards, president of Planned Parenthood, wrote in an email earlier this week that Pence's proposal was "the most dangerous legislative assault on women's health in Planned Parenthood's 95-year history," the Times reports.

Democratic New York Rep. Jerry Nadler called the amendment a "bill of attainder" and argued it was a "war against women," according to the Hill.

"I hear that we must punish Planned Parenthood by defunding them because they've committed a number of sins; sin No. 1, they are large abortion providers, even though none of those abortions are paid for by the federal government," Nadler said.

"No one is being found guilty of a crime here, I know about those things," he said, referring to the definition of a bill of attainder, which doles out punishment for a crime that has not received a trial.

"I know the gentleman is one of the smartest people I know but this is not a bill of attainder."

The amendment, which will head to the Senate upon its expected passage in the House, will likely face difficulty in the Democratically-controlled chamber.

Update: In a vote of 240 to 185, with one Congress member voting "present," the House on Friday voted to pass the Pence Amendment. The bill will now move to the Senate.