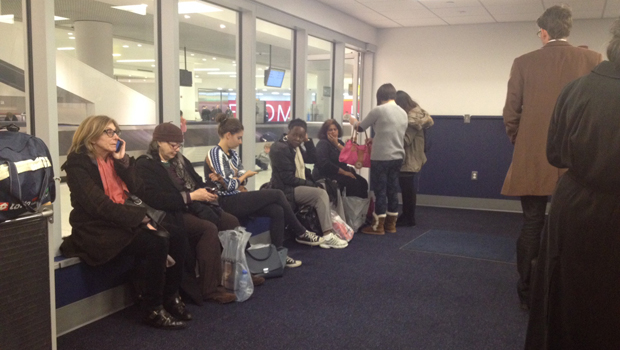 Passengers who arrived at New York City's John F. Kennedy International Airport on a Delta Air Lines flight from London Monday night were apparently let out into a section of the airport where they did not have to clear immigration or customs.

The passengers aboard Delta Flight 3 from Heathrow Airport found themselves in an area of Terminal 4 near a domestic baggage claim around 8:30 p.m., according to a passenger aboard the flight, Andrew Rostron. Rostron is the husband of a CBS employee.

Airport employees realized they were in the wrong place.

The names of the passengers who had congregated were taken down, and they were then sent through immigration and customs.

Anyone who had just a carry-on bag could have walked out of the airport, Rostron noted.

Delta Airlines told CBS News it is aware that "a small number of customers off Delta flight 3 from London to New York's Kennedy International Airport were able to bypass customs screening. Delta is working with the Port Authority as well as Customs and Border Protection and is looking into the matter. Customer security is of vital importance and Delta makes every effort to follow appropriate procedures."

The Port Authority of New York, which runs the airport,  and New Jersey and U.S. Customs and Border Protection could not immediately be reached for comment.