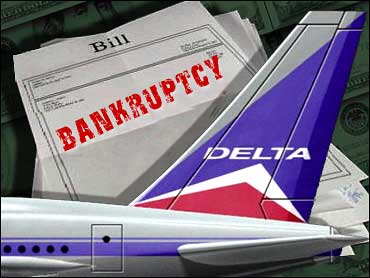 Delta's total debt is roughly $20.5 billion, and it listed $21.6 billion in assets as of June 30. The asset figure would make Delta's bankruptcy the ninth-largest in U.S. history, according to bankruptcy tracker New Generation Research Inc. The ranking could change depending on how Delta accounts for its recent $425 million sale of feeder carrier Atlantic Southeast Airlines to SkyWest Inc.

Passengers were not expected to see any immediate effects from the filing. Delta was expected to continue its normal schedule. However, as the company makes its way through bankruptcy court, some changes to Delta's operations could occur, analysts say.

Atlanta-based Delta, the nation's third-largest carrier, has lost nearly $10 billion over the last four years despite announcing it would cut up to 24,000 jobs. In September 2004, it also said it would shed its Dallas hub as part of a sweeping turnaround plan aimed at saving the airline. It has since scaled back its operations in Dallas.

Delta follows into bankruptcy UAL Corp., the Elk Grove Village, Ill.-based parent of United Airlines, and Arlington, Va.-based US Airways Group, Inc., which is undergoing reorganization for the second time in three years. Fort Worth, Texas-based AMR Corp., the parent of American Airlines, the nation's biggest carrier, teetered on the verge of bankruptcy before winning deep concessions from its employees. The other so-called legacy carriers, those with a large presence in multiple regions prior to deregulation in 1978, are Eagan, Minn.-based Northwest and Houston-based Continental Airlines Inc.