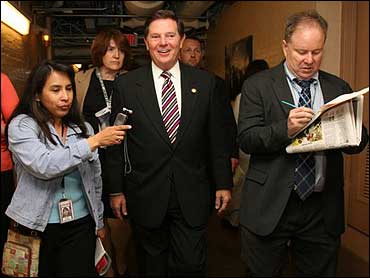 Former Majority Leader Tom DeLay, bowing to legal and ethical troubles, said goodbye to the House on Thursday and took a shot at his liberal opponents. Some Democrats walked out during the farewell.

The 11-term Republican from Texas, said it is customary for departing lawmakers to "reminisce about the 'good old days' of political harmony and across-the-aisle camaraderie."

"We debate - often loudly, and often in vain - to convince our opponents and the American people of our point of view," said DeLay, arguing that partisanship is not a symptom of a democracy's weakness, but of its health and strength - especially from the perspective of a political conservative.

"We debate here on the House floor. We debate in committees. We debate on television, and on radio, and on the Internet, and in the newspapers," he said. "And then every two years, we have a huge debate - and then in November we see who won."

"That is not rancor," said the impassioned departing GOP lawmaker. "That is democracy! You show me a nation without partisanship, and I'll show you a tyranny."

"For all its faults, it is partisanship — based on core principles — that clarifies our debates, that prevents one party from straying too far from the mainstream and that constantly refreshes our politics with new ideas and new leaders," said DeLay. "Whatever role partisanship may have played in my own retirement... all we can say is that partisanship is the worst means of settling fundamental political differences - except for all the others."

A Democrat could be heard telling colleagues to walk out of the House chamber as DeLay criticized liberals who he said stand for "more government, more taxation, more control over people's lives and decisions and wallets." At least two dozen Democratic lawmakers rose and left.

DeLay was a darling of conservatives. Although some in DeLay's party found his hardball tactics problematic, many acknowledge his success in moving the Republican agenda and delivering legislation for Bush.

"A large part of his legacy will be a culture of corruption that he built here in the Congress of the United States," said Minority Leader Nancy Pelosi, D-Calif.

In compliance with his own party's rule, DeLay stepped down as majority leader, the No. 2 job, last year after he was indicted in Texas on campaign money laundering charges. His ties to former lobbyist Jack Abramoff, who has pleaded guilty in a federal bribery investigation, have come under scrutiny.

Two of DeLay's former associates, Michael Scanlon and Tony Rudy, have pleaded guilty to charges in the Abramoff case. DeLay has repeatedly denied wronging in both cases and did so again before the full House.

"I have scraped and clawed for every vote, every amendment, for every word of every bill that I believe in my heart would protect human freedom and defend human dignity," DeLay said. "I have done so at all times honorably and honestly, Mr. Speaker, as God is my witness and history is my judge."

DeLay, who is keeping quiet about his plans after Congress, once famously called Abramoff "my closest and dearest friend." DeLay's political committee used a skybox leased by Abramoff to entertain donors. DeLay also took trips organized or arranged by Abramoff.

Use of the skybox was not against House ethics rules and DeLay has said he did not know Abramoff or his clients paid for the trips.

"He was a friend. I admired his conservative activism and I'm saddened that he ended up this way," DeLay said. Asked his thoughts on how that friendship has tainted him, DeLay said: "I'm a big boy. I understand the process."

Some of his loyalists consider DeLay a victim of partisan politics. But others say he was undone by his own misdeeds.

DeLay was operating a pest extermination business in Sugar Land, Texas when, disgusted with the Environmental Protection Agency, he ran for the Texas House. In the Texas Legislature he was called "Hot Tub Tom," a nod to his partying ways. He was elected to the U.S. House in 1984 and soon after became a born-again Christian.

He rose to power by raising millions in campaign money for fellow Republicans, gaining their loyalty as he helped them win campaigns.

DeLay joined former House Speaker Newt Gingrich in leading Republicans to power in 1994, but participated in a failed coup to oust Gingrich. When Gingrich eventually stepped down amid his own ethics troubles, the door opened for DeLay to become majority whip, the No. 3 position.

He held the job for eight years and in it, earned his nickname "The Hammer." It was a reference to his brass-knuckle politics, ability to maintain party discipline on votes and his knack for political strategy that he used to outmaneuver Democrats.

He told representatives that if able to do it all over again, the only thing he would change would be to "fight even harder." He encouraged lawmakers to help foster children, a cause he has championed while in Congress.

Republicans, particularly those from Texas, surrounded DeLay after his speech. A few Democrats set aside party politics and crossed the aisle to say goodbye.