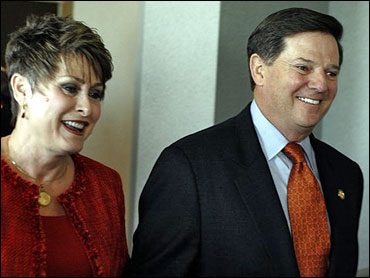 Rep. Tom DeLay proclaimed his innocence to state felony charges Friday at a place that is central to his case: the domed Texas state Capitol.

DeLay's efforts in the 2002 elections helped Republicans win full control of the statehouse for the first time since Reconstruction.

The question, should DeLay's case go to trial, is whether his efforts were legal — or tainted by misuse of corporate donations.

DeLay, who has stepped aside as House majority leader while under indictment, appeared in court as a criminal defendant for the first time Friday, listening while his lawyer pointedly asked the presiding judge to withdraw from the case for making campaign donations to Democrats and their liberal allies.

In a hearing that lasted less than five minutes, Judge Bob Perkins deferred further proceedings until a hearing can be held on the request for a new judge. DeLay will have a chance to plead innocent inside a courtroom later.

"I will be exonerated," the Texas Republican said at the Capitol, following with blistering criticism of prosecutor Ronnie Earle. The appearance came one day after DeLay was booked and photographed at a county jail.

"Pigs get fatter, but hogs get slaughtered, and Tom has been a hog," Carter said.

The former Republican leader, charged with conspiracy and money laundering in a campaign finance case, smiled occasionally as he sat alongside his wife Christine in the courtroom. He did not speak during the brief session that at times appeared more like a campaign debate than a legal proceeding.

Rather than the corporate donations DeLay is accused of illegally funneling to candidates, defense lawyer Dick DeGuerin made an issue of the $3,400 in political donations the judge has made to Democratic causes, including one to a group critical of DeLay and Republicans.

"I noticed yesterday MoveOn.org, to which you have contributed, was selling T-shirts with Mr. Delay's mugshot on it," DeGuerin said, referring to the liberal interest group and the picture of a smiling DeLay taken Thursday.

"Let me just say I haven't ever seen that T-shirt, number one," the judge said. "Number two, I haven't bought it. Number three, the last time I contributed to MoveOn that I know of was prior to the November election last year, when they were primarily helping Sen. (John) Kerry," the Democrats' 2004 presidential nominee.

The judge ended the exchange quickly, saying, "The best way for me to handle" the request for a different judge would be to defer further proceedings.

That means the issue now goes to hearing before a state administrative judge, B.B. Schraub.

Schraub, a Republican, became an administrative judge in 1990 and was appointed or reappointed by four governors: three Republicans and one Democrat. Schraub, from 1989 through 2002, contributed at least $1,500 to federal Republican campaigns, according to disclosure reports compiled by the Center for Responsive Politics. He donated an additional $4,900 to Texas GOP candidates between 1998 and 2001, according to state disclosure reports analyzed by a public interest group, Texans for Public Justice.

MoveOn.org denied it was selling any shirts as described by DeLay's lawyer and issued a statement that said, "DeGuerin has either bad information or lied in court." DeGuerin said later that he had made a mistake. The T-shirts were offered by two groups that receive money from MoveOn.org, he said.

Outside the courtroom, the prosecutor spoke dismissively of DeLay's efforts to get Perkins to step aside. Judges in Texas must run for election and DeLay's lawyers filed a motion Thursday identifying 34 donations Perkins had made.

"What this means is if a judge had contributed to Crime Stoppers that judge could not hear a burglary case," said Earle, a Democrat. "Carried to its extreme, that is what I think this motion means and I think that's absurd."

"We don't live in a country where political party determines the measure of justice," Earle said.

DeLay, R-Texas, and two political associates are accused of funneling corporate money to Texas legislative campaigns, in violation of state law prohibiting use of these donations for election or defeat of state candidates.

Two grand juries accused the three men of sending $190,000 in corporate money, raised by a Texas group founded by DeLay, to the Republican Party in Washington, and having the money routed back to several Texas candidates.

The felony charges triggered an upheaval in the House Republican leadership, as DeLay was obligated to step aside under House rules. He wants his job back.

From the moment he arrived at the Travis County courthouse, it was clear that DeLay was not just an everyday defendant.

Five sheriff's deputies stood in the aisle forming a line that separated the side where the DeLays sat from dozens of reporters.

At the request of his Capitol Police detail, the lawmaker was driven into an entrance normally reserved for prisoners. He was brought through an area with holding cells, and entered the courtroom after others were seated — accompanied by several Capitol policemen.

Before the hearing began, DeLay, wearing a dark suit, sat with his wife. Both laughed during a private conversation.

After the hearing, DeGuerin took his arguments outside the courthouse, where protesters sang in an effort to drown him out. One of their signs, referring to DeLay's nickname, read, "Is the Hammer heading for the Slammer?"

DeGuerin filed a motion to move the trial out of Austin, one of Texas' most liberal and Democratic cities.

DeLay read a statement at the state Capitol that alleged Earle's case was a partisan effort to punish him.

"Because Ronnie Earle and the Democrat Party could not beat me at the ballot box and could not beat me on the floor of the House of Representatives, they are now desperately trying to challenge me in a courtroom," DeLay said.