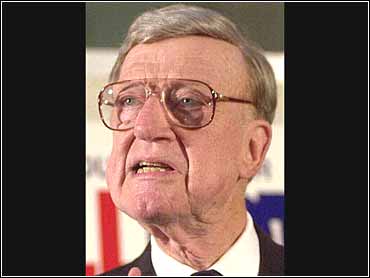 In the tight and critical U.S. Senate race in Delaware, a popular, powerful, and long-time Republican incumbent is in a struggle for re-election, reports CBS News Chief Washington Correspondent Bob Schieffer.

Scrapple (that's hog leftovers to the uninitiated) and apples are a tradition in Delaware. Another First State tradition is William Roth, who's been Delaware's senator for 30 years. Next year, Bill Roth will turn 80. Next week, he wants another term from the voters - and some of them say, why not?

"I know he's getting up in years, but he is really good, OK?" one voter told CBS News.

"The biggest issue for me is the seniority that Bill Roth has and the committee that he's in," another voter said. "If we were to lose that and go back to a junior senator, I think that the State of Delaware loses an awful lot."

For sure, Roth is chairman of the Senate Finance Committee, one of the most powerful committees on Capitol Hill. But critics say the veteran senator has lost a step in recent years, that he may be a tradition that the state can no longer afford. So the Republican incumbent is being challenged by Delaware Gov. Tom Carper, a Democrat who says it's not Roth's age, but his energy, that's the issue.

"Whether a person is 59 or 69 or 79 is not so important, the important thing is the energy they have and the ability to function effectively for the next six years," Carper has said. "I've got a lot of energy. I go real hard day and night."

Roth has campaigned vigorously, but there have been some scary moments. Twice, he has fainted. Minutes after one incident, Roth blamed a minor inner ear problem, saying that he was fine and insisting that no one need be concerned about his health.

As Roth has stumped across his state, he has argued that his long years in Washington are an asset.

"I think that I'm in a position because of my seniority, my experience, I really can serve the people of Delaware," he has said.

But some voters who say they respect Roth add that they aren't so sure.

"Roth has done a great job for Delaware," said a voter told CBS News, "but I'm at the point where I think its time for a little change."

And in a race that's been close from the start, that has been the only real issue.