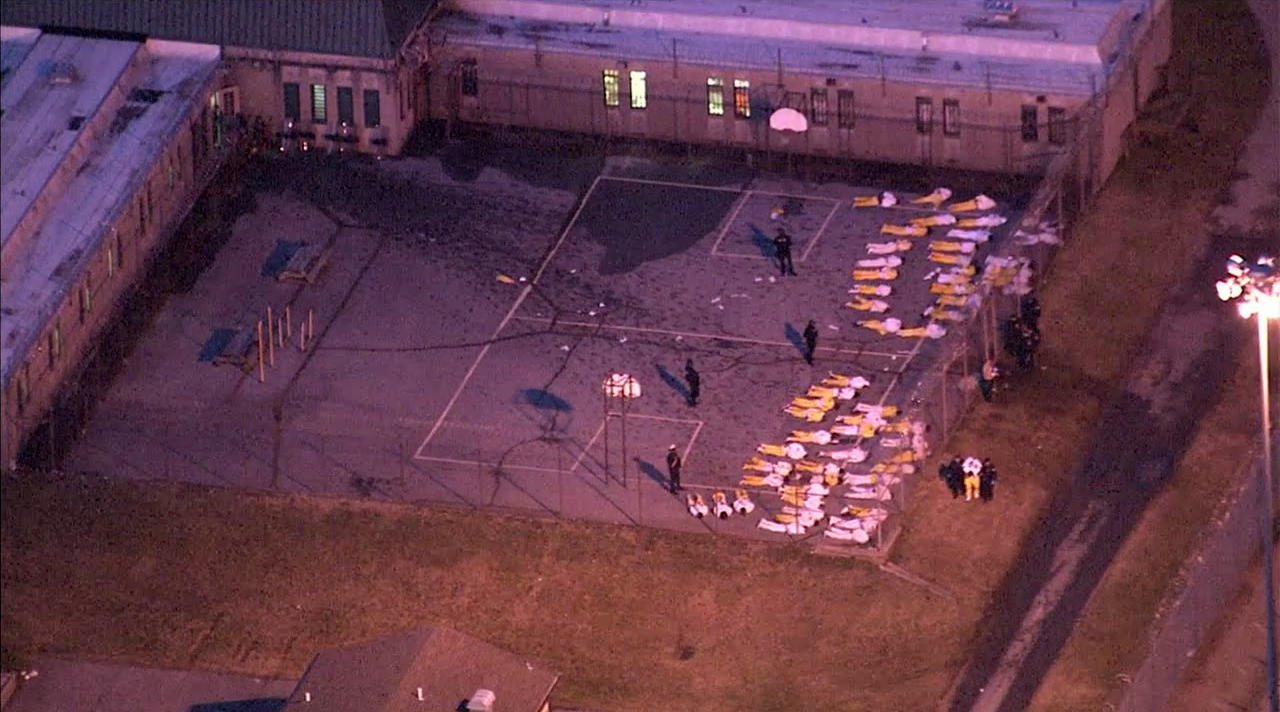 SMYRNA, Del. -- Delaware prison officials say one staffer is dead and a second is alert and talking after authorities ended a hostage situation in the state’s largest prison.

Officials announced in a statement Thursday morning that they had secured the building at the James T. Vaughn Correctional Center where the disturbance occurred. The prison is in Smyrna, about 15 miles north of the state capital of Dover. Officials say after authorities breached the building, one Department of Correction guard was found unresponsive and later pronounced dead.

The inmates took four corrections department workers hostage Wednesday morning, prompting a lockdown of all Delaware prisons. The inmates released one staffer in the afternoon and another Wednesday night. At least one of those staffers had injuries that were not considered life-threatening.

A female counselor who was still being held when the standoff ended early Thursday was uninjured, said Robert Coupe, secretary of the Delaware Department of Safety and Homeland Security.

Tactical teams just after 5 a.m. used a backhoe to breach the building, which had been blocked off by foot lockers the inmates had filled with water to create a heavy barrier, Coupe said. Coupe said one of the inmates’ demands amid negotiations had been to have the building’s water turned on.

Coupe said negotiators believed the water demand was for inmates to hydrate, but ultimately, “they used it against us.”

Coupe said the inmates used many “stalling tactics” during negotiations, and that some had “sharp instruments.” Officials became “very concerned” because they hadn’t had any communication with Floyd, and ultimately decided to breach the building.

Tactical teams believed the female counselor was alive, Coupe said, because negotiators had had some communication with her. She was quickly located and found to be unharmed.

“I’d go so far as to say there were inmates that actually shielded this victim and ensured her safety,” Coupe said.

Floyd was found unresponsive and pronounced dead just before 5:30 a.m. Coupe would not detail how he died.

The building houses 120 inmates, Coupe said. All are being considered suspects amid the ongoing investigtion, he said.

Video footage taken by a helicopter for CBS Philadelphia station KYW-TV flying over the prison early Thursday showed dozens of inmates being led out onto a paved recreation area and made to lie face down. It was not immediately clear which building they were brought out of. It also was not clear if they were the recently released inmates or if they were among those released on Wednesday.

Delaware Gov. John Carney said the priority now is to determine what happened and why.

Speaking Thursday, he said he had ordered flags in the state to fly at half-staff to honor the fallen correctional officer, calling it a “very sad day.” He expressed sympathies to Floyd’s family.

“After a torturous, 15-hour ordeal that went through the night, we learned of Sgt. Floyd’s demise,” Carney said. “My prayers all day yesterday was that this event would end with a different result. But it didn’t.”

The inmates told a local newspaper that concerns about their treatment and the leadership of the United States had prompted their actions.

A preliminary investigation suggests the disturbance began about 10:30 a.m. when a correctional officer inside Building C, which houses more than 100 inmates, radioed for immediate assistance, Delaware State Police spokesman Sgt. Richard Bratz said. Other officers responded to help, and the employees were taken hostage, he said.

Coupe said authorities don’t know “the dynamics of the takeover” or whether inmates had been held against their will.

One of the freed employees was taken to a hospital with injuries that were not life-threatening, authorities said. The condition of the second wasn’t immediately available.

Earlier in the day, inmates reached out to The News Journal in Wilmington in two phone calls to explain their actions and make demands. Prisoners funneled the calls to the paper with the help of one inmate’s fiancee and another person’s mother. The mother told the paper that her son was among the hostages.

In that call, an inmate said their reasons “for doing what we’re doing” included “Donald Trump. Everything that he did. All the things that he’s doing now. We know that the institution is going to change for the worse.”

That caller said education for prisoners was the inmates’ priority. They also said they want effective rehabilitation for all prisoners and information about how money is allocated to prisons.

According to the department’s website, the prison is Delaware’s largest correctional facility for men, with about 2,500 inmates. It houses minimum, medium and maximum security inmates, and also houses Kent County detainees awaiting trial.

It employs 1,500 corrections officers, according to Bruce Rogers, counsel for the Correctional Officers Association of Delaware.

In 2004, an inmate at the Smyrna prison raped a counselor and took her hostage for nearly seven hours, according to an Associated Press report at the time. A department sharpshooter later shot and killed 45-year-old Scott Miller, according to the report, ending the standoff.