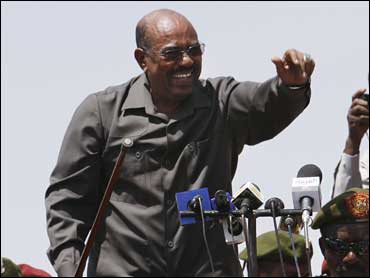 A government-linked Sudanese news agency reports the country's army says it's moving toward full alert by mobilizing three-quarters of its troops.

Sudan's president, meanwhile, has threatened to kick out more aid groups and expel diplomats and peacekeepers.

President Omar al-Bashir's threat came during his first trip to Darfur after an international court issued an arrest warrant against him for war crimes there.

Sudan has already expelled 13 of the largest aid groups operating in Darfur as part of its defiant response to the International Criminal Court's decision last week to indict him.

Sudan has accused those groups of cooperating with the Netherlands-based court.

The army renewed its allegiance to al-Bashir saying it's ready to confront any possible threat, according the report, quoting a statement from the army's chief of staff, Gen. Mohammed Nasreddin.

Al-Bashir was greeted by thousands of cheering supporters, including some on horse and camel back, in the North Darfur capital of El Fasher. Brandishing a sword, he told the throngs that others could be ordered to leave if they got involved with the ICC case. The rally was attended by a number of Arab diplomats, including Egyptian, Jordanian and Lebanese. Western envoys did not accompany the president on the trip.

"Those who respect themselves, we will respect them. Don't interfere in something that doesn't concern you," al-Bashir said. "Don't do anything that would harm the country's security and stability."

"Whoever deviates, we will not let them stay, whether a voluntary organization, an envoy, a diplomatic mission or a security force," he added.

A Chinese company signed a contract to build a road in the area during the ceremony, reflecting Sudan's continuing close ties with China despite the crisis.

The ICC accuses al-Bashir of leading a counterinsurgency against Darfur rebels that involved rapes, killings and other atrocities against civilians. Up to 300,000 people have died and 2.7 million driven from their homes in the conflict since 2003, according to the U.N.

The rally in El Fasher took place far away from the teeming refugee camps where tens of thousands of refugees live after fleeing their homes because of attacks by the government-backed Arab militias.

Al-Bashir rejects the charges and refuses to deal with the ICC. Arab and African nations are pressing the U.N. Security Council to defer any prosecution for at least a year, hoping to defuse the crisis.

The crowd waved aloft pictures of al-Bashir as well as posters ICC prosecutor Luis Moreno Ocampo with an X drawn over his face.

"Tell them all, the ICC prosecutor, the members of the court and every one who supports this court that they are under my shoe," he said. In the Muslim world, stepping on somebody or striking them with shoes is considered an insult.

Hundreds lined the streets of El Fasher as al-Bashir paraded through the town waving from the back of an open pickup truck. The governor of northern Darfur, Mohammed Kebir, told the crowd at the ceremony that this showed that the president was not afraid to visit a region where he is supposedly had committed war crimes.

Al-Bashir accused aid groups of stealing funds allocated to Darfur, saying only a fraction of the donated money actually makes it to the people.

"We tell them this is not going to continue," he said to the cheering crowd. "We are ready to fill the gap ... we will spend it from our pocket."

The United Nations and humanitarian workers say the order punches a giant hole in the safety net that has kept many Darfur civilians alive during six years of war in the vast, arid region of western Sudan.

Without the groups, 1.1 million people will be without food, 1.5 million without health care, and more than one million without drinking water — and outbreaks of infectious disease are a greater danger, the U.N. says.