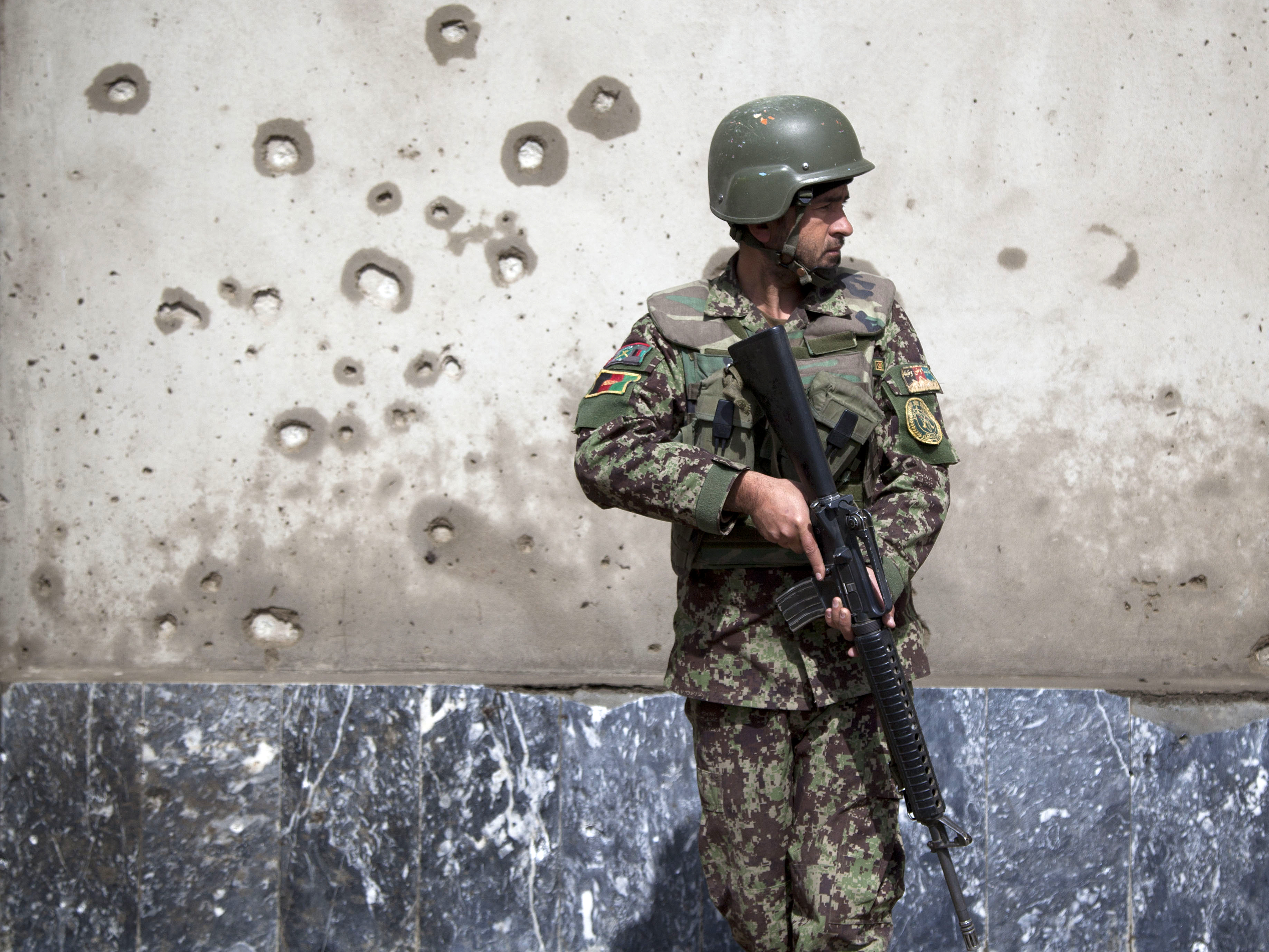 KABUL, Afghanistan Two suicide bombings and a host of looming disagreements with the Afghan president cast a shadow on Saturday over U.S. Defense Secretary Chuck Hagel's first visit to Afghanistan since taking the post.

Nineteen Afghans were killed — including eight children — in the suicide attacks in Kabul and in the eastern Khost province. A U.S. contractor was killed and four soldiers injured when attackers thought to be Afghan soldiers stormed their base and opened fire Friday, just hours before Hagel arrived.

"This attack was a message to him," Taliban spokesman Zabiullah Mujahid said in an email to reporters about one of the bombings, which was outside the country's Defense Ministry in Kabul.

Afghan President Hamid Karzai, meanwhile, was standing by a demand that U.S. special operations forces leave a province neighboring Kabul by Monday for alleged abuses of Afghan civilians — charges U.S. officials deny. And a handover ceremony scheduled for Saturday of a U.S. detention facility also fell through, when U.S. and Afghan officials ran into last-minute disagreements.

The barrage of crises heralding Hagel's arrival illustrates the complex minefield of diplomatic and military issues facing the U.S.-led NATO force, and the Obama administration, as they hand over the country's security to Afghans ahead of the 2014 deadline for the end of NATO combat operations.

The violence also shows the Afghan security forces' struggle to contain the Taliban as NATO troops slowly withdraw, even as Afghan President Hamid Karzai argues for his government to have more control over Afghanistan's security.

Hagel told reporters he thought he could resolve the special operations issue with face-to-face meetings with Karzai Sunday. And Karzai released a statement late Saturday saying he believed the detention issue had been resolved, and the handover would go ahead within a week, though U.S. officials had no comment.

The prison transfer, originally slated for 2009, has been repeatedly delayed because of disputes between the U.S. and Afghan governments about whether all detainees should have the right to a trial and who will have the ultimate authority over the release of prisoners the U.S. considers a threat.

CBS News correspondent Charlie D'Agata reports from Kabul that Bagram Prison is the largest U.S. prison in Afghanistan and at the height of war held 3,000 prisoners. Today it was down to the last 50 detainees.

Earlier this week, Karzai said some prisoners would be freed after the handover, D'Agata reports. The U.S. has been insisting on a veto over any detainee releases. The top U.S. commander here, Gen. Joseph Dunford, doesn't seem to be budging.

"If there are people who need to be detained, we will ensure they're detained," Dunford told CBS News.

The Afghan government has maintained that it needs full control over which prisoners are released as a matter of national sovereignty. The issue has threatened to undermine ongoing negotiations for a bilateral security agreement that would govern the presence of U.S. forces in Afghanistan after the current combat mission ends in 2014.

NATO officials see the weekend violence as part of the Taliban's coming campaign for the spring fighting season. "There's a series of attacks that have started as the snow is thawing. We had a potential insider attack yesterday ... and there's been a number of attacks on the border," said Brigadier Adam Findlay, NATO's deputy chief of staff of operations, in an interview with The Associated Press Saturday.

In the first attack Saturday, a suicide bomber on a bicycle struck outside the Afghan Defense Ministry around 9 a.m. local time, just as employees were arriving for work. About a half hour later, another suicide bomber targeted a joint NATO and Afghan patrol near a police checkpoint in Khost city, the capital of Khost province in eastern Afghanistan, said provincial spokesman Baryalai Wakman.

Karzai condemned the bombings, calling them un-Islamic. "The perpetrators of such attacks are cowards who are killing innocent children at the orders of foreigners," he said in a statement emailed to reporters. Karzai usually uses the term "foreigners" to refer to Pakistan, which he blames for failing to crack down on Taliban militants who take sanctuary there.

Hagel was nowhere near the Kabul blast, but heard it across the city. He told reporters traveling with him that he wasn't sure what it was.

"We're in a war zone, I've been in war. You know, so — you shouldn't be surprised when a bomb goes off or there's an explosion," said Hagel, a Vietnam War veteran. Asked what his message to the Taliban would be, he said that the U.S. was going to continue to work with its allies to insure that the Afghan people have the ability to develop their own country and democracy.

In addition, a suspected insider attack by Afghan soldiers against their U.S. allies occurred in Kapisa province in eastern Afghanistan several hours before Hagel arrived Friday. Three men presumed to be Afghan soldiers forced their way onto a U.S. base and opened fire, killing one U.S. civilian contractor and wounding four U.S. soldiers, according to a senior U.S. military official.

The official told the AP investigators were "95 percent certain it was an insider attack," because the three men came from the Afghan side of the joint U.S.-Afghan base, and rammed an Afghan army Humvee through a checkpoint dividing the base, before jumping out and opening fire on the Americans with automatic weapons. All three attackers were killed.

The official spoke on condition of anonymity because he was not authorized to speak publicly.

The Taliban said it was not behind the Tagab base attack, and has not yet weighed in on the attack in Khost, but the group claimed responsibility for the morning attack at the Defense Ministry shortly after it happened.