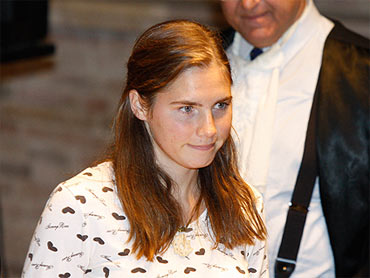 A lawyer for the former boyfriend of Amanda Knox painted the U.S. coed as naive, spontaneous and imprudent as she argued Monday that both Knox and her lover were innocent in the slaying of the American's British roommate.

Giulia Bongiorno, who is defending Knox's ex-boyfriend, Raffaele Sollecito of Italy, compared Knox to the film character Amelie in the 2001 French movie of the same title. That is the film Knox and Sollecito claim they were watching on video the night that Meredith Kercher was fatally stabbed in the throat in 2007, Bongiorno reminded the court in final arguments.

"Amanda, just like Amelie, has a lot of energy. She is naive ... (and) candid" like the French film character, Bongiorno told the court. "The approach of Amanda toward life is exactly the same of Amelie, spontaneous, immediate and imprudent."

Bongiorno, who won fame as a criminal lawyer when she successfully defended former Italian Premier Giulio Andreotti on charges of Mafia association a few years ago, argued that Sollecito, an Italian, wound up being wrongly accused of Kercher's murder because of a bloody footprint in the bedroom where the woman was slain.

Sollecito, 25, and Knox, 22, are accused of murder and sexual violence in the death of Kercher, who was found in her bedroom in the rented house she shared with the American from Seattle. Both defendants insist they are innocent.

Kercher was a 21-year-old university exchange student from Leeds. All three were students in Perugia, a university town in Umbria, in central Italy.

Knox's lawyer will get his chance Tuesday but the case against Sollecito is virtually identical to that against Knox, CBS News correspondent Allen Pizzey reports from Perugia.

Among the arguments presented by Sollecito's lawyer is that police transcriptions of wiretaps included derogatory comments about Knox, Pizzey reports.

Knox's defense summation will also refute claims made by the prosecution in summation that Knox and Kercher were enemies rather than friends, Pizzey adds. Her parents say recovered text messages between the two will prove that.

"And one of the key things that is at the end of those text messages is a little plus sign and in that world of texting that means a kiss," her father Curt Knox said. "And so how they could have come up with a hatred scenario with them texting back and forth that way is beyond me."

A verdict in the long-running trial is expected toward the end of this week. Prosecutors have argued for conviction and life imprisonment - Italy's stiffest penalty - for Knox and Sollecito.

"Raffaele was about to graduate, and was cultivating his dreams, but a footprint took those dreams away from him," Bongiorno said. She contended that analyses indicate that the print was made by a shoe of a different kind and size than the ones Sollecito wore.

Prosecutors have argued that the Kercher was the victim of a drug-fueled sex game involving Knox, Sollecito and a third defendant, Rudy Hermann Guede of the Ivory Coast.

Guede, 22, was convicted of the same charges in a fast-track trial last year and sentenced to 30 years in prison. He is appealing his conviction.

Her parents have already bought her a ticket back to Seattle but if the verdict is guilty, Pizzey reports that Amanda Knox will stay in jail during an appeal process that could take longer than the court case.