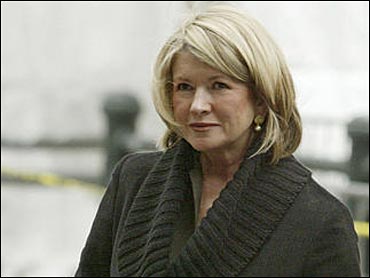 Defense lawyers in the Martha Stewart trial aimed Thursday to show star witness Douglas Faneuil routinely joked with Stewart's stockbroker — even as he claims the broker intimidated him into covering up the facts of Stewart's stock sale.

But the judge blocked the lawyers from putting e-mails into evidence showing that Faneuil, then a Merrill Lynch & Co. assistant, had an easygoing relationship with broker Peter Bacanovic.

Faneuil claims Bacanovic ordered him to tip Stewart on Dec. 27, 2001, that ImClone Systems founder Sam Waksal was dumping shares of stock, leading Stewart to do the same. He also claims that Bacanovic pressured him to support a false cover story for the sale.

On the witness stand Thursday, Faneuil admitted he joked with Bacanovic at work even as the broker was pressuring him. Faneuil described their relationship as "schizophrenic."

Bacanovic attorney David Apfel asked Faneuil whether Bacanovic had specifically asked him to lie to investigators. Bacanovic had not, Faneuil said — but "I understood what he was telling me."

The defense began cross-examining Faneuil on Wednesday after he delivered damaging testimony against the homemaking maven and her stockbroker. The pair are accused of lying to investigators by saying they had a pre-existing arrangement to sell Stewart's ImClone shares when the price fell to $60.

"He did some damage yesterday," said former New York State Supreme Court Justice Leslie Crocker Snyder on CBS News' The Early Show Thursday. "He was very good. But of course he was very well prepared by an excellent prosecution team, so we would have to expect that."

How jurors rate Faneuil's credibility is expected to be a critical component of how they judge whether Bacanovic and Stewart intended to break the law.

"Can they shake that credibility of Doug Faneuil? If they can't, I think it puts a lot more pressure on both Martha and Bacanovic to testify," attorney Greg Markel told CBS News. "If he comes across and holds up on cross examination I think they have to contradict him."

Cross-examination of Faneuil, 28, was expected to continue into Monday. Court will not be in session Friday.

Faneuil testified Wednesday that he had tipped Stewart — on Bacanovic's orders — that Waksal was dumping his own ImClone shares.

"Peter thought you might like to act on the information that Sam is selling all of his shares," Faneuil said he told Stewart in the call.

"All of his shares?" Faneuil said Stewart answered.

Faneuil said Stewart asked him for a quote on ImClone stock, then declared: "I want to sell." Faneuil sold Stewart's shares immediately, at proceeds of more than $225,000.

The next day, the government released a negative report about an experimental ImClone cancer drug. The report sent ImClone shares down nearly 20 percent. The government estimates Stewart saved $51,000 by getting out early.

Faneuil described repeated attempts by Bacanovic to get him to go along with the story about the $60 agreement. Faneuil initially did so, then changed his story in June 2002 and implicated Stewart and Bacanovic.

In painstaking detail, Apfel walked Faneuil through some of the dates of his many meetings with the government since he changed his story. Apfel appeared to suggest that Faneuil was cooperating with the government in part to avoid prosecution for drug use.

Under questioning from Apfel on Wednesday, Faneuil had admitted that he has repeatedly used marijuana and Ecstasy — and on rare occasions cocaine and the party drug ketamine, also known as Special K — but said he never used any of those drugs while on the job at the brokerage

Faneuil said he hoped he would not be charged with drug offenses.

"Just like they have given you assurance that if you cooperate, they won't go after you for the lies that you told in January and March of 2002, is that right?" Apfel asked.

"As long as I tell the truth now," Faneuil answered.

"Usually they're criminals themselves and they've lied, so this isn't unusual. But what's fascinating here is he wasn't being prosecuted. He hadn't been arrested or indicted when he decided to become clean. He says it was because he was feeling a pang of conscience. But, really, he wasn't being prosecuted then," Snyder told co-anchor Harry Smith. "What is the defense going to say his motive was? What was his motive to suddenly come clean?"