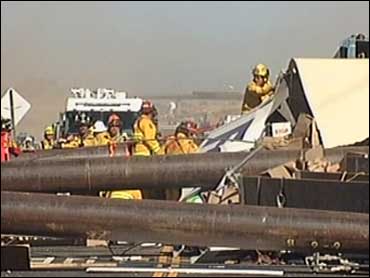 The American Red Cross on Tuesday defended a special fund it set up for the families of victims of the Sept. 11 terrorist attacks, and said it is exploring extending benefits to the families for longer than the customary three months.

The Red Cross has been under fire in recent weeks for not funneling enough of the $564 million raised for the Liberty Fund to families and victims of the World Trade Center and Pentagon attacks. Controversy over the fund led in part to the resignation of the charity group's president, Bernadine Healy.

The Red Cross decision to set aside more than $300 million for other needs including a reserve fund to deal with possible terrorist attacks in the future really set off Congress, reports CBS News Chief Washington Correspondent Bob Schieffer.

"That's not what the people opened their hearts and wallets for. It's for their (the victims) families," said Rep. Bart Stupak, D-Mich, during a house subcommittee
hearing on charity fraud and oversight. "If you thought we'll do it on September 11, on the heels of September 11 and open up the gates, and put out for everything we ever needed, then you took advantage of a very tragic situation. "

Donations to the Red Cross usually go to a general disaster relief fund but Healy took the unusual step of setting up a separate fund for victims of the Sept. 11 attacks.

So far, the Liberty Fund has paid out $121 million in direct cash assistance to victims and their families, Red Cross officials said Tuesday. But it has also spent $6 million on administrative costs and overhead and will spend $50 million from the fund to set up a strategic blood reserve. Another $14.7 million has been spent on community outreach for things like brochures with information on anthrax and mental health counseling nationwide for children.

The charity also plans to set up a $264 million reserve that could fund more general terrorist fallout - like the ongoing anthrax threats - once the needs of the World Trade Center and Pentagon victims are met.

"I don't believe there's a donor in America that would say 'don't help those victims of anthrax, that's not what my donation was for.'"

The Red Cross board is also considering extending benefits for victims and their families from three months to six months or possibly longer.

Currently, families receive three months of cash assistance from the Red Cross to help pay bills. Since Sept. 11, 25,000 families have received such assistance, which averages about $25,000 per household. Some 500 households have turned down Red Cross aid, Blaul said.

"It's hard to grieve if you have to worry about paying bills," said Michael Farley, Red Cross vice president for chapter fund raising.