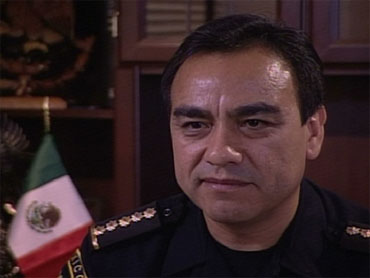 My CBS News colleagues, producer Eleanore Vega, photographer Michael Comfort and I had gone to Tijuana to report on the escalating drug war being fought on the streets of that sprawling city just across the border from San Diego. We had been chronicling the conflict for several years.

Every time we'd visit, shocked and weary residents would tell us things couldn't get any worse, but every year the situation grew more deadly and dire. Rival gangs, battling for control of smuggling routes into the U.S. and thereby control of the $20-billion illicit drug trade, were growing barbarous -- employing torture, beheadings, shootouts on streets full of pedestrians. The mayor of Tijuana tapped Leyzaola to stop the carnage.

Leyzaola told us then he was going to "annihilate" the cartels and invited us to come back in a year to see the progress. This year, there is progress to report. The homicide toll, most from drug violence, is down dramatically this year -- from more than 800 in 2009 to 532 this year. But the numbers aren't quite what they seem. 2008 was by far the most violent year in Tijuana's history. This year is the second most violent.

But there's a painful downside to the progress. The death toll within Leyzaola's police department is up sharply. Twenty-eight Tijuana police officers have been killed this year so far, twice the number killed last year. The cartels have threatened to kill five officers every week until Leyzaola resigns.

When the drug gangs made a similar threat to the police chief in Juarez, Mexico, that chief resigned and fled. Leyzaola refuses to leave. To do so, he said, would make him an "accomplice" of the cartels. Instead, it's made him a target. When we spent a day with him recently, a posse of heavily armed body guards surrounded him wherever he went. I asked him if he always travelled with so much protection. His answer, "Always, everywhere." And with good reason. The cartels have tried to assassinate him four times in the last year. So, he told me he never goes out to dinner or the movies, sleeps every night in a military barrack away from his family. The Spartan life, he says, allows him to focus exclusively on defeating the drug gangs.

Leyzaola sees the violence directed at him and his officers as a good sign. He says his department has "declared war" on the cartels and the gangsters now know the Tijuana police are a force to be reckoned with. When they face a cop, he says, they are facing their enemy.

Interview with Alberto Diaz-Cayeros, the director of the US/Mexico Center

It wasn't always so. It was well known throughout the city that many officers in the Tijuana Police Department were in the pockets of the cartels. There were numerous reports of arrested drug kingpins being released after the arresting officer got a call from a higher up in the department. Leyzaola changed all that. His first order of business was to clean his own house. He did financial checks and gave polygraphs to all 2,200 officers, then fired or arrested and jailed 460 found to have ties to the cartels. Leyzaola says he has, "prosecuted commanders, chiefs, officers, those who served as the eyes and ears of the drug cartels in the department." Last year, he said, he was fighting a two front war -- one against the bad guys in his department, the other against the drug thugs on the streets. Now he says, it's a one front war -- against the cartels. It's a war Julian Leyzaola is determined to win.