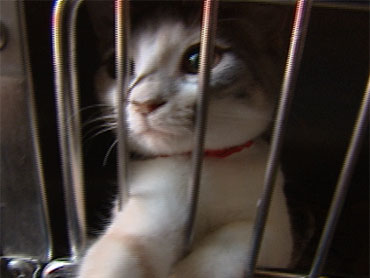 There are actually more pet cats in the United States than dogs, yet dogs firmly hold the title of man's best friend. Many say it's because dogs are easier to understand.

Bell explained cats are just as social and expressive as dogs.

She said, "You just have to know how to speak their language."

She told Bell, "I believe cats, in general, are almost human-like."

Bell asked Abramson whether she feels she knows what her cats are thinking and how they feel at any given moment. "I do," Abramson responded, "because each cat is unique in their own way. They have different meows that I recognize."

Bell said not that -- they also have different purrs, according to a recent study conducted by Dr. Karen McComb, a specialist in animal communication at the University of Sussex in England.

McComb told CBS News, "When they want to be fed, they give this particular purr, which has the cry embedded in it."

Cats, Bell said, have a "feed me" purr and a "regular" purr. McComb has captured them on audio and deciphered the differences between them.

McComb said, "They're good at using a signal, learning to use a signal that has an outcome that is good for them."

That's why, Bell said, feline fans everywhere say kitties get a bad rap. Some people think the only way to understand cats would be if they could talk.

Dr. Plotnick, a feline specialist, said, "Cats are very misunderstood. People think they're aloof, that they're sort of snobby. When nothing could be further from the truth."

Plotnick says you just have to know how to read their signs.

"Ears and tail tell you a lot," he said. "When they're happy they're ears tend to stand straight up and their tail is straight up in the air."

And of course, a mad cat may hiss. Plotnick pointed out one feline behavior that you may not understand: constant rubbing. It doesn't, he said, mean that the cat has an itch.

"Cats are territorial creatures," he explained. "And they like to mark out their territory. They have glands in their face that release a pheromone and they're sort of marking your -- they're claiming you as their territory."

However, even Plotnick agrees cats are a bit complicated.

"They don't try to please you to try to obtain a reward," he said. "They live life on their own terms and they hope that you like it."

How much do you know about cats?

Bell gave the quiz below. See how much you really know about your feline friend:

Q: If a dog wags his tail, it usually means he's happy. Is the same true when a cat waves or flits her tail?
A: No, when a cat flips their tail and nothing else on the body is moving, it means they are upset about something.

Q: Cats groom themselves so much only because they like to be really clean.
A: They do like to be clean. However, grooming is also a comfort for them. They get an uncomfortable situation and they will groom. Also, they are predators in the wild, so they groom themselves to cut down on their scent to their prey doesn't know they're around.

To learn where and bhow to adopt the kittens seen in the segment, visit Kitten Little Rescue.