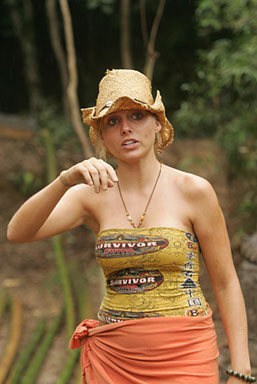 A lot of us still have quite a bit of decorating to do for the holidays. But, at the White House, they are already done.

The Early Show co-anchor Hannah Storm spoke to first lady Laura Bush about the decorations, holiday parties and, on a more somber note, about the families who will be separated from their loved ones who are serving in the military in Iraq.

The Christmas tree at the White House came from eastern Pennsylvania. This year, Mrs. Bush chose the theme: "Deck The Halls And Welcome All."

She told Storm that about 25,000 people come to the White House, either on tours or at parties, throughout the month of December. On the schedule for Nov. 30 were three events: a morning press preview, an afternoon party for the designers of the décor, and an evening reception.

"Everything really is red this year," said the first lady, adding that there are festive greens also around the house.

"The White House Christmas tree, the big beautiful Christmas tree, is all covered with crystals and I think it's really gorgeous with snow on it. The tablecloths in both the East Room and the dining room is a red-on-red polka dot and we have a little forest of trees that runs down the middle of the table."

The decorations also include a gingerbread house that is a replica of the White House. On the roof is Santa's sleigh, pulled not by eight tiny reindeer but by two little doggies: presidential pets Barney and Miss Beazley. A model of the family cat, Kitty, is seen in front of the house, below a birdhouse. Pastry chef Roland Mesnier also used more than 800 sugary snowflakes to decorate the gingerbread house.

The holiday menu at the White House includes tamales (which the Bush family traditionally eats on Christmas Eve), as well as chicken fried steak with gravy, sweet potato soufflé, and such holiday classics as ham and turkey. The White House executive chef is Cris Comerford.

"Of course, we will have a number of really fabulous desserts," added Mrs. Bush. "Some cakes wrapped up like presents that I think people will really find not only beautiful but, of course, delicious."

Storm asked the first lady about her thoughts of the troops deployed to Iraq and the families that will be missing their loved ones this holiday season.

Mrs. Bush replied that she thinks about the U.S. troops in Iraq "every day. I think about them with very deep respect. I meet them all over the country, and I know the special burden of worry that is on the shoulders of the ones whose loved ones are deployed. So I want to send them my very best wishes and my respect."

Storm asked Mrs. Bush if she had "words of comfort and hope" for them "as I think many were hoping that perhaps with the recommendations of the Iraq Study Group that we would begin a pullout of troops. But, yet, once again today, we hear our troops will be there indefinitely."

Replied Mrs. Bush: "Well, we don't have the recommendations from the Iraq Study Group. Those have not been committed to the president. We don't know what's in those yet.

"So I'm glad that we're going to stand with the Iraqis. I hope that this meeting that the president had with (Prime Minister of Iraq Nouri) al-Maliki, which seemed to be a very substantive meeting, will be the first of many discussions of ways we can work together to make sure the violence is reduced."

For more information on how the White House celebrates the holidays, and on how you may be able to check out the decorations for yourself, visit the White House Web site.