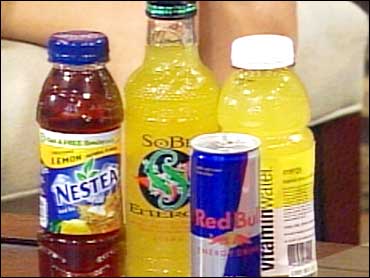 If you are asked how much caffeine your children consume, you may think it's not that much. But it may be a lot more than you know.

In the July issue of Consumer Reports magazine, an article called "Caffeinated Kids" tells parents why it is important to know which food contains caffeine.

Ronnie Sandroff, the health editor of Consumer Reports magazine visited The Early Show to discuss parents' responsibility to identify low-caffeine or no-caffeine products for their children and themselves.

She says caffeine can make people jittery and nervous, particularly children. According to the article, some experts recommend children not have more than 100 mg of it a day (about 3 cans of Coke or the equivalent of it).

One of the problems, Sandroff says, is that manufacturers don't have to list caffeine among their ingredients, unless it's been added to the product. But, they don't have to indicate how much caffeine it contains.

The big surprise, says Sandroff, is just how much caffeine is in some of the products, such as yogurt, ice cream, candy, juices and "energy drinks." The article found eight fluid ounces of Mountain Dew has 37 milligrams (mg) of caffeine, more than a Classic Coca-Cola, that has 24 mg of caffeine and a Pepsi with 27 mg of caffeine.

The article says some energy drinks like an AMP Energy drink has loads caffeine (77 mg). A Sunkist Orange soda has almost as much as colas, but Minute Maid Orange doesn't have any caffeine.

Sandroff says it's a good idea to buy lower-caffeine, caffeine-free food and drinks — including limiting chocolate intake. Consumer Reports explains that the word "decaffeinated" means at least 97 percent of a product's naturally occurring caffeine has been removed.

Sandroff warns that the amount of milligrams that are indicated for various beverages are for 8 fluid ounces. But at fast food restaurants, "Supersized" servings have a lot more.