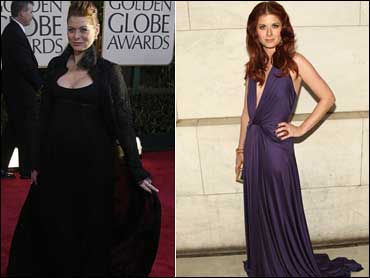 Debra Messing looked glorious as she walked the red carpet dressed in Michael Kors at the annual awards for the Council of Fashion Designers of America held in New York Monday.

The "Starter Wife" actress is known for her consistently spot-on sense of style, but she admits that even she has had her share of fashion mishaps.

"My biggest fashion disaster was one year at the Golden Globes," Messing told the Open All Night Web site. "I was seven months pregnant, and from the morning to the night of the event, my stomach grew. So I had to leave the Golden Globes early because I couldn't fit into my dress any more."

Messing is married to actor and screenwriter Daniel Zelman, whom she met in graduate school. Roman is the couple's first child.
By Judy Faber