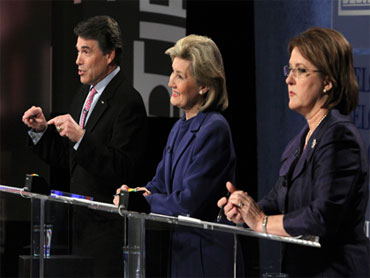 (AP PHOTO)
Debra Medina, a Republican candidate in the Texas gubernatorial race, is walking back some comments she made earlier today on the Glenn Beck radio show suggesting the U.S. government could have had a role in the terrorist attacks of Sept. 11, 2001.

Beck asked Medina whether she believed the government played a part in the attacks, the Statesman reports.

When Beck asked her whether she would disavow any staffers who might be a part of the so-called "9/11 truther" movement, Medina said, "I'm certainly not into mind control or thought-policing people. We've got a very diverse team in this state, and it's because Texans are standing shoulder to shoulder to support and defend the Constitution. I frankly don't have time to go through and do psychological testing on people and know every thought or detail that they have. I don't see us having a team of radical individuals if you will."

Medina (shown on the right in the above picture) will face off against current Gov. Rick Perry and Sen. Kay Bailey Hutchison in a Republican gubernatorial primary. A businesswoman and activist who once volunteered for Texas Rep. Ron Paul, Medina has gained traction in the governor's race by appealing to grassroots conservatives. The most prominent faction of grassroots conservatives, the "tea partiers," is a disparate group that includes some extreme elements. The "truther" movement, however, is sometimes associated with those on the extreme left and recently became a problem for a White House adviser who subsequently resigned.

Medina made clear in a statement today that she has never been involved with the "truther" movement, and she said, "There is no doubt in my mind that Muslim terrorists flew planes into those buildings on 9/11."

She said she was caught off guard by Beck's question because it is not relevant to the Texas gubernatorial race. "This campaign has always been about private property rights and state sovereignty," she said. "It is focused on the issues facing Texans. It is not a vehicle for the 9-11 truth movement or any other group."

While she backed away from any association with the movement, Medina said she stood by the underlying premise for her response, which was the right to question the government.

"I think the fact that people are even asking questions on this level gets to the incredible distrust career politicians have fostered by so clearly taking their direction from special interests instead of the people," she said. "It is absolutely the right and duty of a free people to question their government."