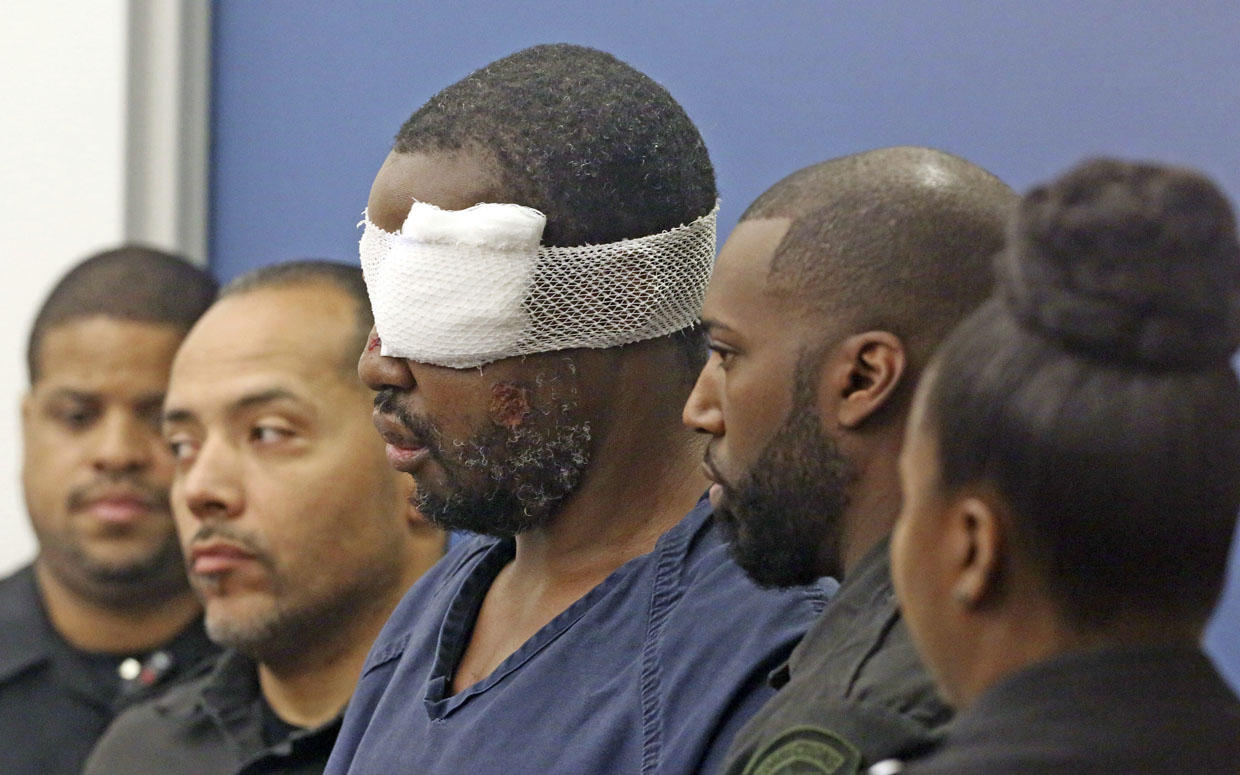 ORLANDO, Fla. -- An autopsy shows that an Orlando police officer gunned down outside a Wal-Mart last week was struck four times and the fatal shot hit her neck, apparently as she lay on her back on the ground, according to an arrest affidavit filed Friday.

The bullet from the fatal shot appeared to be impacted by concrete, suggesting that Lt. Debra Clayton was on her back, according to the affidavit.

Security video showed Markeith Loyd running out of the store and Clayton pursuing him about 10 feet behind after the lieutenant was told by a Wal-Mart customer that Loyd was wanted in the fatal shooting of his pregnant ex-girlfriend last month.

Loyd took cover behind a concrete pillar and fired at Clayton, striking and fracturing her hip. Clayton was on her back when Loyd approached her, the affidavit said.

“Clayton fires her weapon from her back seven times at the suspect as he stands over her firing,” the affidavit said. Clayton was promoted from sergeant to lieutenant after her death.

The affidavit said Loyd had on a bulletproof vest, and he was wearing body armor when he was arrested Tuesday night.

Loyd told detectives that the fatal shooting might not have happened if the lieutenant “had waited for backup.”

“She pulled her gun out first,” Loyd told detectives, according to the affidavit.

A day after an expletive-laced court appearance on charges in Dixon’s death, the ex-fugitive was more subdued but still interrupted a judge when he went before her on five new charges filed against him in Clayton’s death.

Loyd was charged Thursday evening with first-degree murder, attempted first-degree murder of a law enforcement officer, carjacking with a firearm, aggravated assault, and wearing a bulletproof vest while committing an offense in connection with Clayton’s death, reports WKMG.

Judge Jeanette Bigney set no bond for the first three charges and a total of $30,000 for the last two, guaranteeing that Loyd will stay in jail pending his trial.

During an initial hearing Thursday morning on charges related to his ex-girlfriend’s death, Loyd went on a profanity-laced rant that ended when he said “f---you” to the same judge.

Loyd appeared defiant throughout Friday’s hearing, which lasted less than two minutes. When the judge asked for Loyd’s name, he was silent. “I recognize you from yesterday. Corrections, is this Mr. Loyd, Markeith Loyd?” the judge said.

Then, as Bigney read the new charges related to Clayton’s killing, Loyd interrupted with, “May I have your name, please?” When the judge asked if Loyd would like a public defender to represent him, he said, “Your name is, ma’am?”

On Thursday, Loyd repeatedly used profanities and accused authorities of “making up” allegations against him. He accused police of assaulting him during his arest Tuesday after a nine-day manhunt and said he didn’t resist.

Loyd appeared with injuries to his face and a bandage over his eye on Thursday and Friday.

At a Thursday  press conference, Mina called Loyd a “violent, dangerous and unpredictable” person and said officers showed “incredible restraint” during the arrest.

Mina said Loyd could have turned himself in, but chose not to.

“We were the ones who found him,” Mina said.