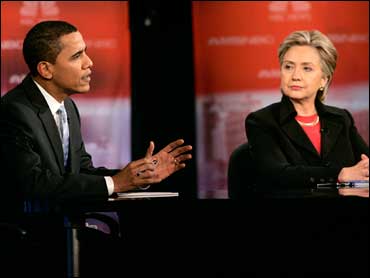 This column was written by Katha Pollitt

The media are hopelessly sexist and relentlessly trivial. So much we've learned from the mass hysteria over Hillary Clinton's "emotional moment" in New Hampshire. (Seattle Post-Intelligencer columnist Robert L. Jamieson: "She morphed into a 'compassion brand' — like, irony of ironies, Kleenex"; New York Times columnist Maureen Dowd: "Can Hillary Cry Her Way Back to the White House?")

Even Southern charmer John Edwards couldn't resist observing that a commander in chief needed "strength and resolve" — a view echoed by Fox commentator Dick Morris ("There could well come a time when there is such a serious threat to the United States that she breaks down") and given full misogynous display by nationally syndicated cartoonist Pat Oliphant's "Madam President Meets the Bad Guys," portraying a dumpy, tearful Hillary surrounded by Osama, Kim Jong I1 and similar. All this fuss over a welling of the eyes so brief that if you blinked your own you'd miss it. I have moments like that every day! This was the Dean Scream all over again: a nano-nothing whipped into a self-congratulatory media typhoon.

In the 24/7 chat room, reality never dawns: the narrative is tweaked, not junked. Thus, when Hillary dared to win the New Hampshire primary although pundits had already gleefully hustled her off the stage, the script was quickly rewritten from Tears Sink Woman to Tears Save Woman: 46 percent of women voters, the silly dears, supported a "humanized" Hillary, according to exit polls. (Bill Maher: "They wanted to see the robot cry.") But maybe women supported Hillary this one time to protest cable blowhards like Chris Matthews, who capped his long career of insane Hillary hatred with this zinger: "The reason she's a front-runner is because her husband messed around." Or perhaps, as Susan Faludi and Gail Collins suggested, middle-aged women see in Hillary a calm and competent multitasker like themselves. Lost in the kerfuffle: Hillary won not only among women but also among voters over 40 and those without a college degree.

I've written many times about sexist attacks on Hillary Clinton as an old, ugly, castrating witch-and-what-rhymes-with-it, but Gloria Steinem's New York Times op-ed in defense of her, "Women Are Never the Front-Runners," was not helpful, to put it mildly. "Gender is probably the most restricting force in American life," Steinem wrote. "Black men were given the vote a half-century before women of any race were allowed to mark a ballot, and generally have ascended to positions of power, from the military to the boardroom, before any women (with the possible exception of obedient family members in the latter)." Yes, black men got the vote first, although they could be lynched for using it. Shirley Chisholm, the black Congresswoman who ran for President in 1972, did famously write, "Of my two handicaps, being female put many more obstacles in my path than being black." But Barack Obama is only the third black senator in the modern era; Deval Patrick is only the second black governor. It may be true, as Steinem suggests, that "the sex barrier [is] not taken as seriously as the racial one." But that doesn't mean the racial barrier really is less serious. It just means that the public expression of racism is beyond the pale in a way that the public expression of misogyny is not.

True, nobody's likely to compare Obama to Kleenex; there will be no cartoons involving watermelon and fried chicken. Instead, as his campaign becomes more of a threat, opponents will try to remove his "postracial" mantle. Already, e-mails circulate claiming he's a secret Muslim who took the oath of office on a Koran — indeed these rumors are so widespread MSNBC's Brian Williams asked Obama about them in the Nevada debate. Hillary's campaign strategist Mark Penn, and Hillary supporters black billionaire Robert Johnson and Representative Charles Rangel, have reminded the world of Obama's self-confessed teenage drug experiences. (The Clinton campaign claimed that when Johnson referred to Obama "doing something in the neighborhood — I won't say what he was doing, but he said it in the book," he merely meant community organizing. Yeah, right.) Most recently, Washington Post columnist Richard Cohen, mainstreaming attacks that have been bubbling for weeks in the right-wing blogosphere, floated the question of anti-Semitism because Obama belongs to a black megachurch run by the Rev. Jeremiah Wright Jr., whose house magazine last year honored Louis Farrakhan. "It's important to state right off that nothing in Obama's record suggests he harbors anti-Semitic views," Cohen writes, before going on to suggest exactly that. "I don't for a moment think that Obama shares Wright's views on Farrakhan. But the rap on Obama is that he is a fog of a man. We know little about him, and, for all my admiration of him, I wonder about his mettle." (In fact, Obama has denounced anti-Semitism many times and has said of Wright, "We don't agree on everything.") Meanwhile, Mitt Romney practices Mormonism, which until a 1978 "revelation" explicitly preached black inferiority and is still explicitly sexist in about a thousand ways. Mike Huckabee gets a free pass from the media for being a Southern Baptist minister who in 1998 went on record supporting the denomination's new doctrine of wifely submission.

Barring an Edwards upset, the Democratic Party is going to nominate either a white woman or a black man as its presidential candidate. This is indeed a testament to how far we have come. Still, it wouldn't take much innuendo and truth-twisting to turn Barack Obama into the Muslim Al Sharpton — surely no more than it's taken to turn Hillary Clinton into the lesbian Lady Macbeth. That's why it's crucial not to get into an oppression sweepstakes. If the campaign becomes a competition between race and gender — Frederick Douglass versus Elizabeth Cady Stanton, as one New York Times graphic put it — the winner on election day will be whichever white man the Republican Party nominates.
By Katha Pollitt
Reprinted with permission from The Nation